MOROCCO – UNCTAD ranks Tanger Med as best-connected port in Africa in 2020
The United Nations Conference on Trade and Development (UNCTAD) has identified Tanger Med in the north of Morocco as Africa’s best-connected port. Tanger Med has 137 direct connections to other ports, ranking 26th in the world on this criteria. Tanger Med is Africa’s largest port in terms of container capacity, handling 4.8 million containers in 2019, a 38% increase compared to the previous year.
August 10, 2020

MOROCCO – German, Belgian and Moroccan joint venture to double phosphoric acid production
Morocco’s OCP Group has partnered with German company Budenheim and Belgian company Prayon for the development of a new purified phosphoric acid production plant. The development will be delivered via their existing subsidiary Euro Maroc Phosphore (EMAPHOS). The OCP announced in a statement that this would consolidate the company’s global leadership in the production of phosphoric acid through the “purified wet process”. The plant, based in Jorf Lasfar, seeks to double EMAPHOS’ annual production capacity by the 4th quarter of 2022. Construction of the plant is due to start in early 2021.
August 11, 2020

MOROCCO – Fitch Solutions finds Morocco’s car industry most attractive in the MENA region
According to the Fitch Solutions Foundation report released on August 12, “Morocco is the top ranked MENA market in our Autos Production Risk/Reward Index, thanks to a robust outlook for production growth, low labor costs and positive industry policy.” The report identifies that Morocco has a high vehicle production growth rate, low labor costs and a strong industry policy framework. The report did however note room for improvement “in terms of the country’s logistics network and growing the active labor force.”
August 14, 2020

TUNISIA – Outgoing prime minister calls for Rades port expansion project
Outgoing Prime Minister Elyes Fakhfakh has called to accelerate the expansion of the Rades port. Construction works on docks 8 and 9 of the port were announced in early 2019 but have since stalled following an unsuccessful tender call. Expansion of the two docks would increase the output of the port from 7-8 containers per hour to 50 containers per hour. The aim of the expansion is to increase the overall annual processing capacity to 600,000 20 foot containers.
August 5, 2020

TUNISIA – Cyprus-based company sets up new regular shipping line set up with Italy
Anarres Shipping Company has set up a new weekly roll-on/roll-off (RoRo) shipping line servicing the Sousse (Tunisia) and Marina Di Carrara (Italy) ports. This service will be delivered by the multipurpose ship M/S Vasaland with a weekly stopover in Sousse, the general manager of the company, Nikkos J Frangos announced. “Our project is to serve an expected increase in cargo volume. Many factories are relocating from Bangladesh and China to North Africa. That’s why we expect to see in the near future many new plants to be built in Tunisia,” he added. Anarres Shipping also plans to add a second stop on the line at the port of Sete in France.
August 20, 2020

ALGERIA – Russian military company Almaz-Antey sets up after-sales service in Algeria
Almaz-Antey, one of Russia’s largest weapons and military equipment manufacturers, has announced that the company will set up an after-sales and maintenance center for its products in Algeria. Centers will also be opened in Egypt, India, and Kazakhstan.
August 24, 2020

ALGERIA – Algeria to host its first international digital trade fair
The company Andalus Trade, Shows, Exhibits and Events (TSEE) is organizing the first edition of the Algerian international digital trade fair. Taking place from September 13 to 27, 2020, the fair will market Algerian-based products. Companies can register for free on the platform. The fair will include the participation of several international companies including from the United States, Great Britain, Jordan and China, as well as local companies.
August 31, 2020

MOROCCO – King Mohammed VI warns of new lockdown measures if COVID-19 is not contained
Morocco’s king has warned full lockdown could be reinstated if COVID-19 infections are not contained. In a public speech, King Mohammed VI noted that the rising infection figures are cause for concern and that Moroccans should continue to follow sanitary measures in order to avoid reconfinement. A number of suburbs in Casablanca and Marrakech have already gone back into lockdown, and beaches between Casablanca and Rabat, usually busy over the summer months, have been closed as part of social distancing measures.
August 20, 2020

TUNISIA – Tunisian parliament approves a new government
Tunisia’s Parliament has approved Prime Minister-designate Hichem Mechichi’s government. This is the third government to be formed in less than a year. Mechichi replaces Elyes Fakhfakh, whose government was in power for five months before he resigned following fraud allegations. Mechichi’s cabinet, made up of independent technocrats, won 134 votes out of 217.
September 2, 2020

ALGERIA – Algeria lifts COVID-19 curfew
Following a drop in infection rates, Algeria has lifted curfews across the country. The number of prefectures where the 11pm to 6am curfew is still in place has dropped from 28 to 18 out of a total of 48. Since August 15, authorities have gradually reopened mosques, beaches, hotels, restaurants and cafes, but the borders remain closed.
August 31, 2020

ALGERIA – Algeria and Serbia discuss bilateral economic cooperations
The Algerian Minister for Finance and the Ambassador of the Republic of Serbia in Algeria met to discuss the development of bilateral economic cooperation. The parties discussed the economic and financial situation in both countries, in particular the policies and reforms undertaken to minimize the negative effects of the pandemic. They also discussed the implementation of trade agreements, including the non-double taxation agreement. Serbia and Algeria signed the agreement on 15 October 2018. It defines lower tax rates and exemptions for Algerian and Serbian companies.
September 2, 2020

MOROCCO – Morocco’s tourism sector, 4th hardest hit in the world by COVID-19
According to the International Monetary Fund (IMF), Morocco’s tourism sector is the fourth most impacted in the world by the COVID-19 pandemic. In a report released on August 4, the IMF finds that Morocco ranks among the 10 countries showing the greatest loss from tourism revenues since the start of the pandemic, behind Spain, Egypt, Turkey, Costa Rica, Sri Lanka, and New Zealand. 11% of Morocco’s GDP depends on tourism.
August 4, 2020

MOROCCO – Morocco’s COVID-19 response fund valued at USD 3.6 bn
According to Morocco’s General Treasury, the Special Fund for the Management and Response to COVID-19 has reached USD 3.6 bn in value. So far, USD 2.6 bn has been spent. King Mohammed VI created the fund on March 15.  Its initial value was USD 1 bn to cover the costs of upgrading medical infrastructure and equipment, but it has since increased in order to mitigate shocks to Morocco’s economy through financial assistance programs. Funding comes from several Moroccan public and private institutions such as Maroc Telecom, which has donated USD 147 mn. It also comes from diplomatic donations and contributions by international organisations like the European Union.
August 13, 2020

TUNISIA – 18% Unemployment in Q2 2020
Figures from the National Institute of Statistics show that Tunisia’s unemployment rate in Q2 2020 increased to 18%, up from 15.1% in Q1, bringing total number of unemployed people in Tunisia to 746.4 thousand In April 2020, 58.3% of workers were absent from their place of work. High work absenteeism figures were observed in the mechanical/electrical, hospitality and construction sectors, all hard-hit by COVID-19 lockdown measures, with rates of absenteeism respectively at 93.3%, 90.1% and 82.4%. The sectors that showed the most employment during Q1 were agriculture/fishing (79.4%), banking (68.5%) and mining (53.9%).
August 17, 2020 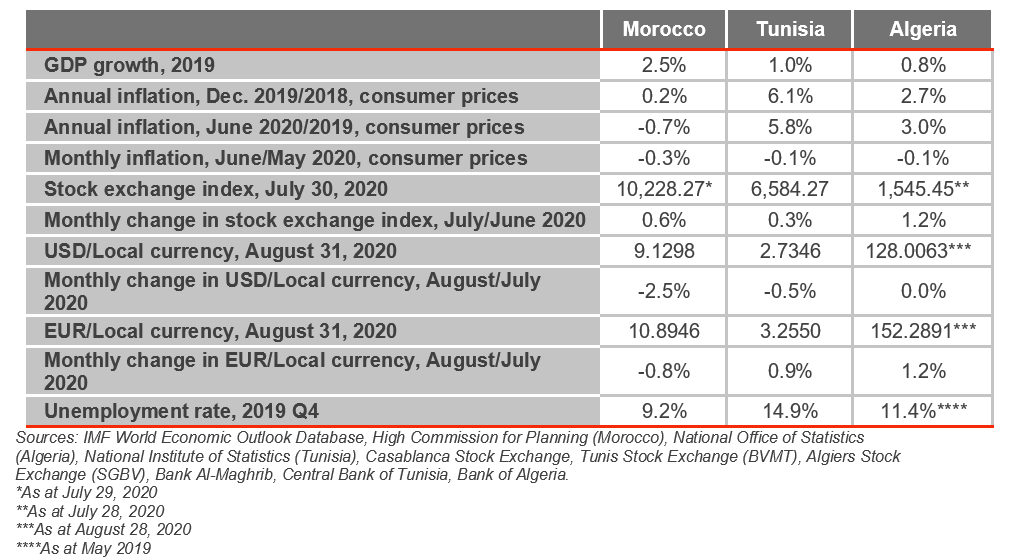