EGYPT – Egyptian government seeks investors to build 17 water desalination plants
The Egyptian government is seeking to build 17 water desalination plants that work with renewable energy, with the participation of local and foreign investors. The project will have a total budget of USD 2.5 bn and is expected to be completed by 2025. It seeks to address water shortages across the country.
Aug. 20, 2021

EGYPT – Egyptian manufacturer signs memorandum of cooperation with Hisense International
Chinese manufacturer of consumer electronics Hisense International has signed a memorandum of cooperation with Elaraby Group, an Egyptian manufacturer of electronics and home appliances. The agreement will allow Elaraby Group to manufacture televisions, refrigerators, and air conditioners under the Hisense brand. The Chinese company is set to invest USD 170 mn into the project, providing about 4,000 job opportunities.
Aug. 29, 2021

MOROCCO – Europa Oil and Gas’ exploration permit in Morocco officially begins
Europa Oil and Gas has announced the official launch of its exploration permit in the Souss valley, central Morocco. According to the company, the region has a potential of more than two billion barrels of oil. Europa Oil and Gas owns 75% of the permit, while Morocco’s National Office of Hydrocarbons and Mines (ONHYM) owns the remaining 25% share. The permit concerns an area of 11,228 square kilometers, with depths varying between 600 and 2,000 meters.
Aug. 3, 2021

MOROCCO – Helios Investment Partners becomes majority shareholder of MedTech
UK-based investment firm Helios has become the majority shareholder of Moroccan leading medical equipment manufacturer MedTech. Helios Investment Partners announced the acquisition of MedTech shares in a press release, but the company did not specify the value of the deal. MedTech is the main supplier of high-end medical equipment and consumables in Morocco. Its clients include the majority of public and private health centers and hospitals in the country.
Aug. 18, 2021

MOROCCO – Opel to produce new electric car Rocks-E exclusively in Morocco
German car manufacturer Opel has announced that the brand new Opel Rocks-E electric car, a twin model of Citroën Ami, will be exclusively produced in the Stellantis factory located in Kenitra, near the Moroccan capital Rabat. The car was developed in the Morocco Technical Center in Casablanca, an R&D and engineering center owned by Stellantis. The new car model will target European markets, notably Germany where the car will be available as soon as autumn 2021. The car will become available in other countries starting 2022. The small car will have a 5.5 battery with an autonomy of 75 kilometers. Its maximal speed will reach 45 kilometers per hour.
Aug. 29, 2021

TUNISIA – Tunisian company Telnet prepares to join Euronext
Tunisian IT company Telnet is set to join European exchange group Euronext. A meeting is planned for September 22 between Telnet’s managers and representatives from Euronext to prepare for the company’s admission to the European exchange group. In 2020, Telnet recorded a turnover of TND 40.6 mn (EUR 12.2 mn) and a net profit of TND 7.1 mn (EUR 2.1 mn).
Aug. 31, 2021

EGYPT – Egyptian President meets Qatari Emir for the first time since the diplomatic crisis
Egyptian President Abdel Fattah El-Sisi has met with Qatari Emir Tamim bin Hamad Al Thani for the first time since Egypt and Qatar severed their diplomatic ties in 2017. The meeting took place in Iraq, on the sidelines of the “Baghdad Cooperation and Partnership” conference. The two state leaders discussed means to develop relations between their countries in all fields.
Aug. 28, 2021

MOROCCO – Moroccan government bans travel to 3 cities and tightens COVID-19 measures
The Moroccan government has banned travel to and from Marrakech, Casablanca, and Agadir to curb the spread of COVID-19. Fully vaccinated citizens are exempt from this restriction. The government has also extended the nationwide night curfew duration to 9 p.m. – 5 a.m. instead of 11 p.m. – 5 a.m. The new restrictive measures include the closing of gyms and swimming pools as well.
Aug. 3, 2021

TUNISIA – Tunisia imposes a 10-day quarantine on non-vaccinated visitors
The Tunisian government has imposed a 10-day quarantine on all travelers entering Tunisia, starting August 25. Fully vaccinated travelers who can present their vaccination pass are exempt from this measure, on the condition of presenting a negative PCR test for COVID-19 that is less than 72 hours old. The quarantine must take place in a hotel establishment designated by the Tunisian Ministry of Health.
Aug. 25, 2021

TUNISIA – Tunisia and Libya agree to close borders due to COVID-19
Tunisia and Libya have agreed to close all their shared borders for health reasons. The decision came amid a continuous rise in COVID-19 cases both in Tunisia and Libya. Delegations from the two countries will continue to communicate in order to reopen the borders and resume flights as soon as the sanitary situation improves.
Aug. 28, 2021

ALGERIA – Algeria cuts diplomatic ties with Morocco
The Algerian Ministry of Foreign Affairs has announced that it has completely cut its diplomatic ties with Morocco, starting August 24. Consular administrations, however, will maintain their activities to serve Algerians and Moroccans. Algeria cited “the hostility” of Morocco as the main reason behind the decision.
Aug. 24, 2021

MOROCCO – Moroccan exports grow by 23.2% in the first 7 months of 2021
Moroccan exports in the first seven months of 2021 have reached a value of MAD 174.38 bn (EUR 16.45 bn), marking an annual increase of 23.2%. The figure is the highest that Morocco has recorded in the past five years. The increase in exports concerns the majority of sectors, but mainly the automobile sector (+38.0%) and phosphate and its derivatives (+30.3%). The only sector that witnessed an annual decline in exports was the aeronautical industry (-3.8%).
Sep. 1, 2021

ALGERIA – Algerian economy records 3.8% growth since the start of 2021
According to Algerian President Abdelmadjid Tebboune, the Algerian economy has recorded a 3.8% growth since the start of 2021. Algerian non-hydrocarbon exportations have reached a value of USD 2.1 bn – their highest level in 25 years. President Tebboune expects the figure to reach between USD 4.0 bn and USD 5.0 bn by the end of the year.
Aug. 9, 2021 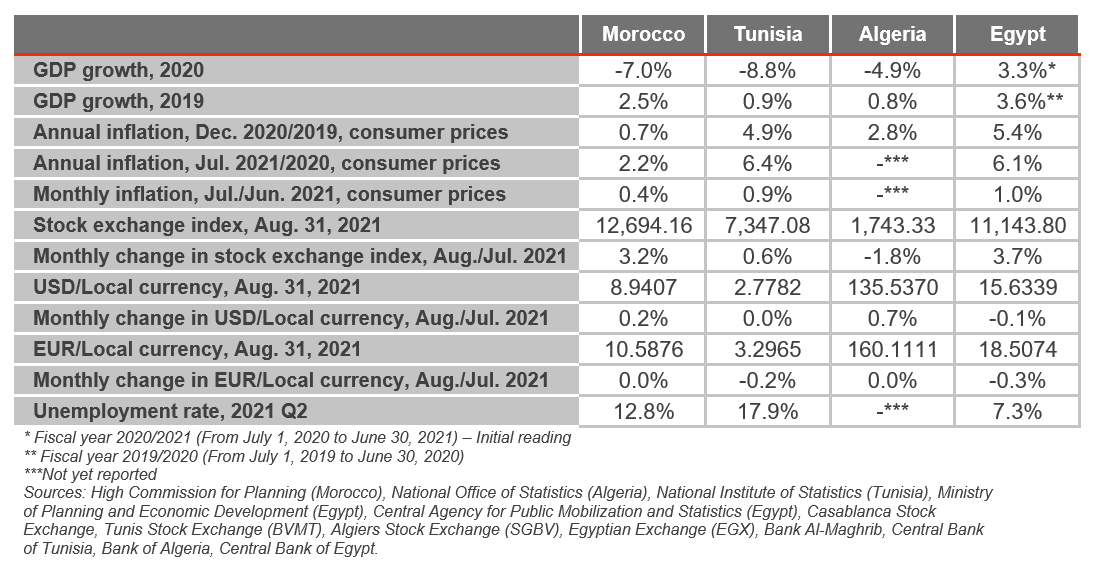