EGYPT – China’s Haier Group Corporation to build a USD 130 mn industrial complex in Egypt
Chinese corporation Haier Group has signed an MoU with Egypt’s General Authority for Investment and Free Zones to build an industrial complex for manufacturing household appliances. The complex will be located in the 10th of Ramadan City, northeast of Cairo, and will have a total surface of 200,000 square meters. The project will require a total investment of USD 130 mn and is expected to create more than 2,000 new jobs. When operational, the complex will have a production capacity of 900,000 devices annually, aimed at African and Asian markets.
Aug. 4, 2022

EGYPT – Maersk Group to invest USD 500 mn to upgrade infrastructure in the Suez Canal
Danish shipping company Maersk Group has signed a cooperation agreement with the Suez Canal Authority to invest USD 500 mn in the canal. The investment will finance the construction of a new container berth in east Port Said. The berth will be 1,000 meters long, adjacent to the existing berth of 500 meters, and it will increase the number of cranes to 30. The project seeks to increase the rate of ships transiting the Suez Canal.
Aug. 11, 2022

EGYPT – Egypt signs seven MoUs to establish a green hydrogen complex near Suez Canal
Egypt has signed seven new MoUs to establish a green hydrogen production complex in the Ain Sokhna industrial zone, on the western coast of the Gulf of Suez. The agreements were signed between several Egyptian government agencies on one side and seven international companies on the other. The companies that signed the MoUs are the UK’s Globelec and Actis, the UAE’s Alcazar Energy and KK Power International, Saudi Arabia’s Alfanar, India’s ACME Group, and the American-Egyptian Mediterranean Energy Partners.
Aug. 25, 2022

MOROCCO – Luxury hotel chain Waldorf Astoria to launch its first African hotel in Morocco
Luxury hotel chain Waldorf Astoria has decided to launch a project in Tangier, northern Morocco. The project, called “Star Hill,” will require a global investment of MAD 1.5 bn (EUR 142.2 mn) and will include 95 rooms and suites, 20 luxurious riads, and a “Royal villa” reserved for VIPs. The hotel is set to open in by the end of 2024. The project is Waldorf Astoria’s first expansion in Morocco and in Africa.
Aug. 27, 2022

TUNISIA – Germany’s PSZ Electronic to launch a new automotive wiring factory in Tunisia
German electrical manufacturing company PSZ Electronic is set to launch an industrial unit specializing in automotive wiring in Bizerte, northern Tunisia. The project will be located in the Ghezala industrial zone and will require an investment budget of TND 100 mn (EUR 31.4 mn). The project is expected to generate 3,200 new jobs. The new factory will be PSZ Electronic’s fourth production unit in Tunisia.
Aug. 5, 2022

ALGERIA – Germany’s Bosch begins talks to open a subsidiary in Algeria
German multinational Bosch has begun official talks with Algerian authorities to launch a subsidiary in Algeria. The Algerian Minister of Industry and Trade received several representatives from Bosch, alongside the General Director of the German Chamber of Commerce in Algeria to discuss the future expansion. The project would allow Bosch to increase its presence in Africa by using Algeria as a logistics hub.
Aug. 27, 2022

MOROCCO – King Mohammed VI calls on Morocco’s partners to clarify their Western Sahara position
King Mohammed VI has called on Morocco’s partners to explicitly clarify their position regarding the Western Sahara issue. The Monarch made the invitation during his speech on the occasion of the 69th anniversary of the Revolution of the King and the People. “I should like to send out a clear message to everyone: the Sahara issue is the lens through which Morocco looks at the world. It is the clear, simple benchmark whereby my country measures the sincerity of friendships and the efficiency of partnerships,” he declared. “I therefore expect certain states among Morocco’s traditional partners as well as new ones, whose stances concerning the Moroccanness of the Sahara are ambiguous, to clarify their positions and reconsider them in a manner that leaves no room for doubt,” the King added.
Aug. 20, 2022

MOROCCO, TUNISIA – Morocco and Tunisia enter a diplomatic crisis over the Western Sahara dispute
Morocco has decided to recall its ambassador to Tunisia and cancel its participation in the TICAD 8 conference held in Tunis. The Moroccan decision came after Tunisian President Kais Saied held an official reception ceremony in Tunis for Brahim Ghali, the leader of the Polisario Front, the party that claims independence in the Western Sahara region. In response to the Moroccan decision, Tunisia also decided to recall its ambassador to Rabat.
Aug. 26, 2022

ALGERIA – France and Algeria begin “a new phase” in bilateral relations with the signature of a pact
France and Algeria have signed a “renewed partnership” pact during an official visit of French President Emmanuel Macron to the North African country. The pact, signed by President Macron and his Algerian counterpart, Abdelmadjid Tebboune, marks the beginning of “a new phase” in political relations between the two countries. During the signing ceremony, French and Algerian officials also signed four other cooperation agreements in the fields of scientific research, higher education, sports, and diplomacy.
Aug. 27, 2022 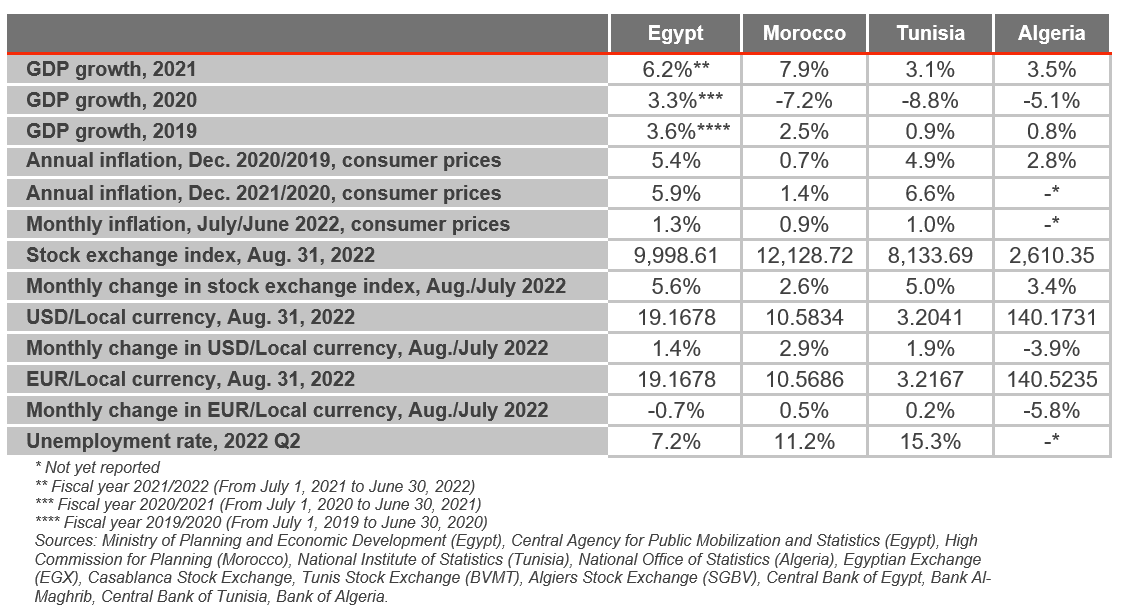