Daio acquires Özen for TRY 165 mn
Daio Paper Corporation, one of Japan’s largest paper manufacturers, has acquired Özen Kişisel Bakım Ürünleri Üretimi A.Ş. (Özen) from Turkish Yıldız Holding for TRY 165 mn. Established in 1998, Özen is a producer of personal care products with the brand name Komili. Daio’s management stated that “Turkey is expected to have a solid growth in its domestic hygiene market with a population of 82 million and more than 1 million births per year and has a potential to become a production base for possible export to MENA (Middle East and North Africa) and Russia and its neighbouring countries”.
Mar. 3, 2020

GPS Bulgaria acquires Mobiliz
The cloud-based solution provider GPS Bulgaria has acquired the vehicle tracking system Mobiliz, previously owned by the Turkish investment fund Mediterra Capital. Established in 2004, Mobiliz has close to 100 employees and is one of the two largest players in the vehicle tracking systems market in Turkey, their products being used in more than 350,000 vehicles.
Mar. 23, 2020

OYAK cooperates with Taiwanese CSRC for carbon black investment
Turkish OYAK Group has decided to establish a facility in the province of Hatay, with 220,000 tons of annual production capacity, enough to meet Turkey’s entire demand of carbon black. Turkey currently depends on imports of carbon black, which is required in various industries, including tyre production. For this TRY 1.6 bn investment to be completed within 30 months, OYAK Group will cooperate with one of world’s largest carbon black producers, Taiwanese International CSRC Investment Holdings Co. Ltd.
Mar. 26, 2020

Airlines cancel flights due to coronavirus pandemic
The Turkish government has prohibited all international flights as from March 27. In addition, Turkish Airlines (THY) has limited domestic flights to routes between Istanbul, Ankara and some other metropolises, from March 28 until May 1. Turkish private airline company Pegasus has cancelled all domestic flights until May 15.
Mar. 27 – Apr. 13, 2020

Automotive plants in Turkey suspend production
The country’s major automotive manufacturers, including TOFAŞ, Ford Otosan, Honda, Toyota, Hyundai, Oyak Renault, Mercedes Benz Türk, Karsan, MAN, Anadolu Isuzu, Otokar, and Türk Traktör, have temporarily stopped production due to the coronavirus pandemic. In parallel with this development, most of the automotive suppliers have also suspended or phased down their production activities. The Automotive Suppliers Association of Turkey (TAYSAD) reported that the production volume of their members dropped by 60% in March compared to February. Some of the vehicle manufacturers decided to restart production from April 20 on.
Apr. 2, 2020

Former deputy PM launches new opposition party
Ali Babacan, former foreign minister and deputy prime minister who had resigned from the ruling “Justice and Development Party” (AKP), has launched a new party with the name “Democracy and Progress Party”, its acronym DEVA meaning “remedy” in Turkish. It has become the eleventh party currently represented in the Turkish parliament.
Mar. 10, 2020

Turkey institutes legal proceedings at the WTO against the EU
Turkey has requested the World Trade Organization (WTO) to start dispute consultations regarding the European Union’s restrictions on imported steel products. The EU had started applying those restrictions in July 2018 in response to import duties launched by the U.S.
Mar. 21, 2020

Turkish government takes various measures to control the pandemic
As of Apr. 21, there have been 95,591 total cases of coronavirus, and 2,259 reported deaths in Turkey. The Turkish government has taken various measures to get the pandemic under control. On March 19, the Ministry of the Interior closed the road and railway border crossings with Greece and Bulgaria to vehicles and passengers, only allowing cargo-carrying lorries to pass. A curfew for people older than 65 or suffering from a chronic illness has been imposed as of March 22, and for everyone under the age of 20 as of April 3. On March 27, intercity travel has become subject to governorate permit, the passenger capacity of public transport vehicles has been limited, picnic sites have been closed at weekends, and all international flights have been cancelled. On the second and third weekend in April, as well as on the long weekend starting April 23, a curfew was imposed for 30 metropolitan municipalities and the province of Zonguldak.
Mar. 22 – Apr. 21, 2020

Turkish government announces economic package
The Turkish government has announced several measures to counteract the economic impact of the coronavirus pandemic. The TRY 100 bn package includes the postponement of taxes in the tourism sector, a VAT relief for airline transportation, postponement of bank loan principal and interest payments, inventory finance support to exporters, an increase of the Credit Guarantee Fund (KGF) guarantee amount and limits, force majeure possibility for companies failing to meet financial obligations, raising the lowest retirement salary to TRY 1,500, postponement of withholding and VAT deductions and social security premium payments for the retail, steel, automotive, logistics, cinema & theatre, accommodation, food & beverage, textile & ready wear, and events & organization sectors. In addition, companies forced to discontinue their activities shall be able to benefit from short-time compensation for their employees. Besides that, a TRY 2 bn fund shall be allocated for aid to needy families. According to the omnibus law issued on April 17, for three months, dismissals have been banned, whereas employees forced to take unpaid leave will benefit from cash support. Stock corporations have been allowed to distribute dividends only up to 25% of their net profit for the year 2019 until September 30, 2020.
Mar. 19 – Apr. 17, 2020

Inflation decelerates
In March 2020, consumer prices in Turkey increased by 0.57% in comparison to the previous month. The CPI went up by 11.86% over the same month of the previous year (YOY). The highest monthly increase was registered in health (2.78%), ahead of food & non-alcoholic beverages (1.95%). The highest monthly decrease took place in transportation (-1.91%). The biggest annual increase by far was in alcoholic beverages & tobacco (40.19%). The domestic producer price index (D-PPI) increased by 0.87% monthly, and by 8.50% YOY.
Apr. 3, 2020

Turkish Central Bank reduces interest rate further
The Central Bank of the Republic of Turkey has reduced its policy rate (one-week repo auction rate) from 9.75% to 8.75%. According to the bank, the economic activity has started to weaken in mid-March because of the effects of the coronavirus pandemic on external trade, tourism, and domestic demand. The current account balance is expected to follow a moderate course in 2020 due to the restraining effects of commodity prices and imports. The sharp fall in commodity prices, especially for crude oil and metal, is affecting the inflation outlook favourably, and the disinflationary effect of aggregate demand conditions has increased.
Apr. 22, 2020 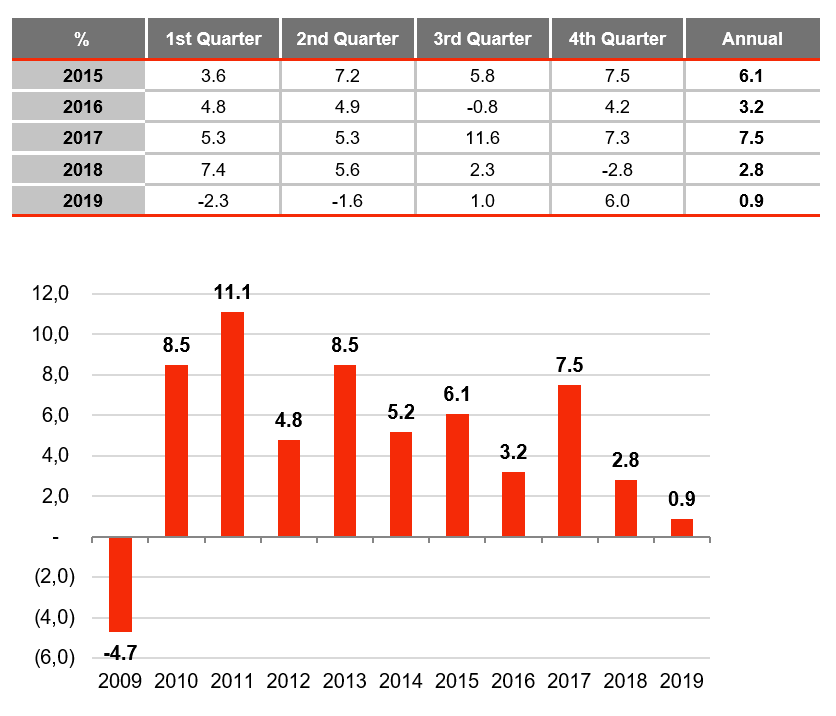 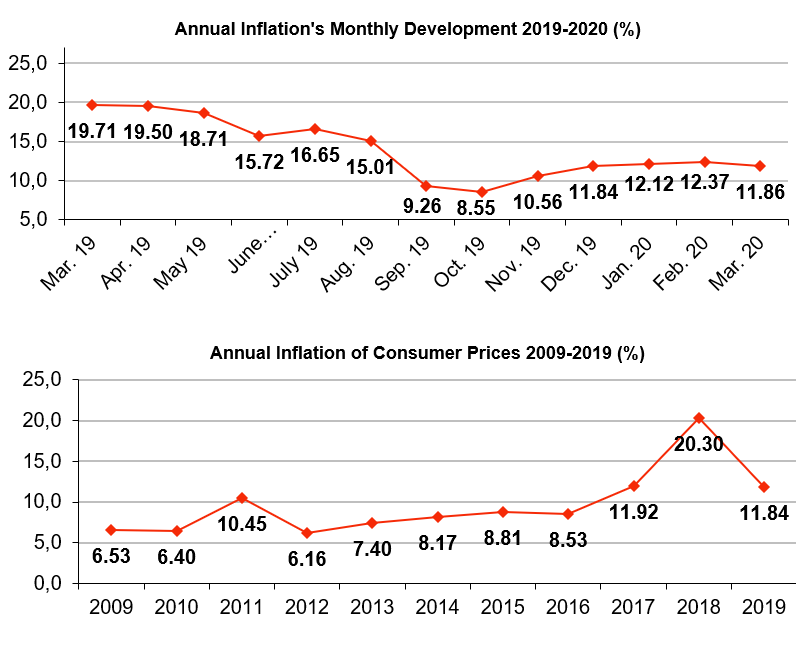