VERBİS deadlines extended
The deadlines for the registration of data controllers in VERBİS (the Data Controllers Registry Information System) have been extended. The new deadline is Dec. 31, 2021 for all companies and institutions.
Mar. 11, 2021

Ford to produce for Volkswagen in Turkey
Ford Otosan, the partnership of Ford Motor Company and Turkish Koç Holding, has announced that it will produce electrical commercial vehicles for Volkswagen in its Gölcük plant. EUR 1.4 bn is planned to be invested for the production of new generation Transit Custom and Volkswagen’s new commercial vehicles, and EUR 600 mn will be invested in the battery plant. The scheduled annual production capacity is 405,000 one-tonne vehicles.
Mar. 16, 2021

Goldman Sachs and EBRD partner with DgPays
Goldman Sachs and European Bank for Reconstruction and Development (EBRD) have agreed to invest in DgPays, Turkey’s leading digital financial technology provider. Max Klimov, Goldman Sachs’ partner in the Asset Management Division, stated that “With its young, tech-savvy population, and talented finance and technology human capital, Turkey is a market that will deliver growth in the fintech space.”
Mar. 23, 2021

Turkey revokes Istanbul Convention
Turkey has withdrawn from the so-called Istanbul Convention by virtue of a presidential decree. This Council of Europe convention, signed by Turkey in 2011, is based on gender equality and aims at protecting women from violence. The Presidency’s Directorate of Communications claimed that the convention had been manipulated to normalize homosexuality. Following the announcement of this decision, mass protests were held by women’s rights organizations in many cities.
Mar. 20, 2021

Erdoğan meets EU leaders
Turkish President Recep Tayyip Erdoğan has hosted Ursula von der Leyen, the President of the European Commission, and Charles Michel, President of the European Council, in Ankara. Following the meeting, von der Leyen stated that they will be working on updating the Customs Union agreement and strengthening public-private sector cooperation. It has become a subject of debate in Europe that von der Leyen was made to sit on a sofa during the talks, which was regarded as conflicting with protocol rules.
Apr. 6, 2021

Russia restricts flights to Turkey
Due to the surge of coronavirus cases in Turkey, the government of the Russian Federation has restricted flights to Turkey until June 1. The flights will continue twice a week exclusively for the return of Russian citizens from Turkey as well as for personnel working on the construction of the Akkuyu nuclear power plant.
Apr. 13, 2021

Coronavirus measures tightened
President Erdoğan has announced new measures to be applied in the first two weeks of the Ramadan to curb the increasing number of coronavirus cases. Accordingly, the nation-wide weekend lockdown continues and the lockdown on weekdays has been extended to between 7 pm and 5 am, while intercity travel is not allowed except under compelling circumstances. Moreover, cafés remain closed during the entire month of fasting, and restaurants may provide takeaway and delivery service only. Foreign tourists have been exempted from the lockdown measures.
Apr. 14, 2021

Central Bank Governor replaced again
President Erdoğan has replaced the Governor of the Central Bank of the Republic of Turkey, Naci Ağbal, who had only been appointed to the position in November 2020, with Şahap Kavcıoğlu, a scholar and former deputy of the ruling Justice and Development Party. Following the decision, the Turkish lira sharply depreciated due to concerns about a possible interest rate reduction.
Mar. 20, 2021

Industrial production increases by 8.8%
Turkey’s industrial production index in February went up by 8.8% YOY, with the manufacturing industry recording an increment of 9.3%. The highest increases in the manufacturing industry category took place in the product groups “machinery and equipment n.e.c.” (27.5%), “electrical equipment” (23.1%), and “other non-metallic mineral products” (21.8%). The highest decreases, on the other hand, were reported in “repair and installation of machinery and equipment” (-22.9%), “coke and refined petroleum products” (-22.3%), and “leather and related products” (-8.6%).
Apr. 13, 2021

Turkish Central Bank keeps interest rate constant
The Central Bank of the Republic of Turkey has kept its policy rate (one-week repo auction rate) constant at 19.00%. The bank stated that “demand and cost factors, supply constraints in some sectors, and high levels of inflation expectations continue to pose risks to the pricing behaviour and inflation outlook”, deciding to maintain its tight monetary policy.
Apr. 15, 2021 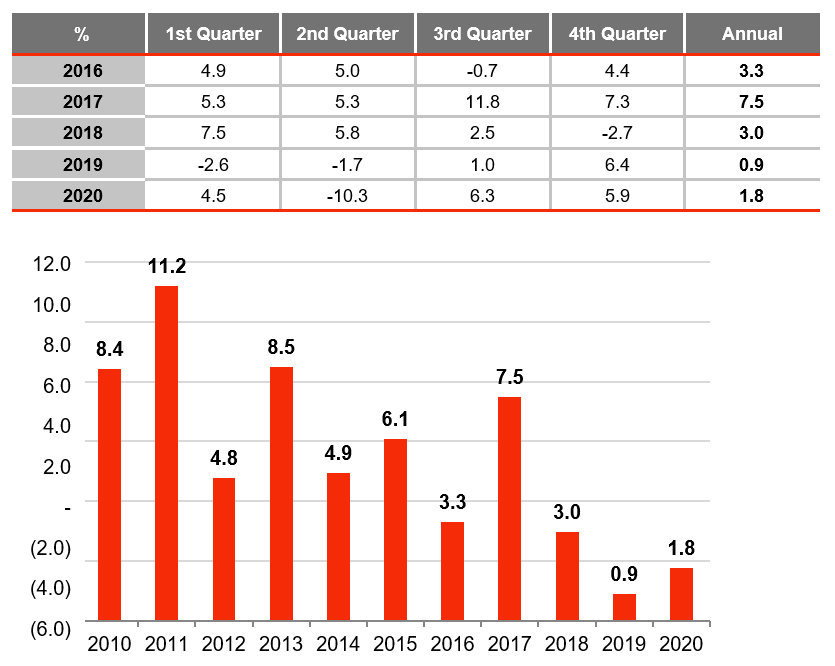 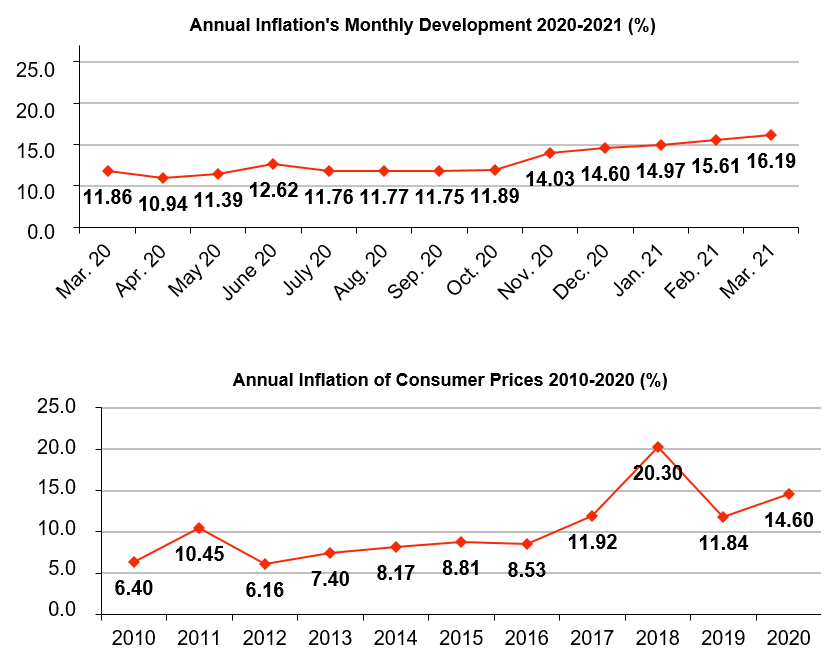