New incentives introduced for EV charging stations
A regulation by the Ministry of Industry and Technology providing new investment incentives for the installation of electric vehicle charging stations has entered into force. It allows for such investments to be eligible for non-repayable state support up to 75% of the investment amount, maximum TRY 20 mn.
Mar. 22, 2022

Amazon to open logistics centre in Istanbul
E-commerce giant Amazon is establishing its first logistics centre in Turkey with an investment of USD 100 mn. The centre, located in Tuzla, Istanbul, is to become operative in the autumn of 2022, and to create more than 1,000 jobs in a year. Amazon had commenced activities in Turkey in 2018.
Mar. 23, 2022

Mitsubishi Colt to be produced in Bursa
Japanese automotive giant Mitsubishi has announced that its new Colt model will be produced in Oyak-Renault’s Bursa plant. The car will be based on the same Renault-Nissan-Mitsubishi Alliance platform as the Renault Clio. It is scheduled to come on the European market in 2023 with gasoline and hybrid options.
Apr. 6, 2022

Microsoft opens R&D centre in Turkey
Microsoft Turkey has commissioned its R&D centre in Istanbul. While the centre started its operations with 30 engineers, this number is expected to exceed 100 in five years. Ralph Haupter, Microsoft EMEA President, characterised Turkey as a unique market with its young population, high technology usage, and high digital adaptation ability, which creates an ideal environment for joint innovations with their customers from different sectors.
Mar. 17-Apr. 12, 2022

On-the-job training programme announced
The Turkish government has launched a new incentive programme to give unemployed citizens the opportunity to gain vocational experience. The duration of the on-the-job training scheme shall be maximum six months for IT and manufacturing, and three months for other sectors. Employers are required to guarantee an employment term of three times the training term. The state will pay a daily allowance to the trainees and cover their social security premiums.
Apr. 14, 2022

Ban on payments in foreign currency issued
An amendment has been made to the decree on the protection of the value of the Turkish currency. Accordingly, parties residing in Turkey are no longer allowed to pay the purchase price for the sale of goods in foreign currency. Even when the contractual price is denominated in a foreign currency, the relevant payment must be made in Turkish lira.
Apr. 19, 2022

Singapore Convention in force in Turkey
The Singapore Convention on Mediation, a multilateral treaty regarding international settlement agreements resulting from mediation, has entered into force in Turkey as of Apr. 11. The convention, which has been signed by 55 countries and ratified by 8 countries so far, is expected to facilitate international trade by enabling disputing parties to enforce settlement agreements more easily.
Apr. 20, 2022

VAT decrease on basic necessities
Turkish President Recep Tayyip Erdoğan has announced that within the scope of the fight against high inflation, the government has decided to decrease the VAT rate on basic necessities and all food & beverage services to 8%, down from 18%. On the other hand, the VAT on home sales has been increased, from 1% to 8% for homes up to 150 sqm, and to 18% for larger homes. The VAT on second-hand automobiles has also been raised, from 1% to 18%.
Mar. 30, 2022

S&P downgrades Turkey’s rating
Standard & Poor’s has decreased Turkey’s local currency credit rating from BB- to non-investment grade B+ while keeping the country’s outlook at negative and the foreign currency score at B+. The agency stated that “The fallout of the Russia-Ukraine military conflict, including rising food and energy prices, will further weaken Turkey’s already tenuous balance of payments and exacerbate inflation.”
Apr. 2, 2022

Inflation continues to increase
In March 2022, consumer prices in Turkey increased by 5.46% in comparison to the previous month, and the CPI went up by 61.14% YOY. The highest monthly increment was registered in transportation (13.29%), followed by education (6.55%). No decrease occurred among the main product groups. The biggest annual price increase was in transportation (99.12%). The domestic producer price index (D-PPI) rose by 9.19% monthly, and by 114.97% YOY.
Apr. 4, 2022

Industrial production keeps gaining
Turkey’s industrial production index in February went up by 13.3% YOY, with the manufacturing industry recording an increment of 14.4%. The highest increases in the manufacturing industry category occurred in the product groups “other transport equipment” (58.5%), “leather and related products” (41.9%), and “apparel” (39.6%). The only decrease was reported in “tobacco products” (-7.4%).
Apr. 12, 2022

Turkish Central Bank keeps interest rate constant
The Central Bank of the Republic of Turkey has kept its policy rate (the one-week repo auction rate) constant at 14.00%. The bank again stated that it “expects [the] disinflation process to start on the back of measures taken and decisively pursued for sustainable price and financial stability along with the decline in inflation owing to the base effect and the resolution of the ongoing regional conflict.”
Apr. 14, 2022 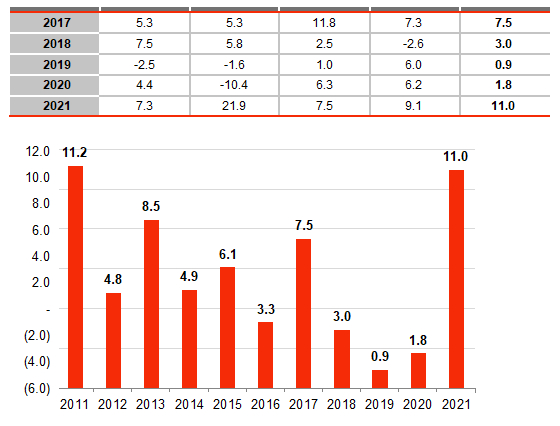 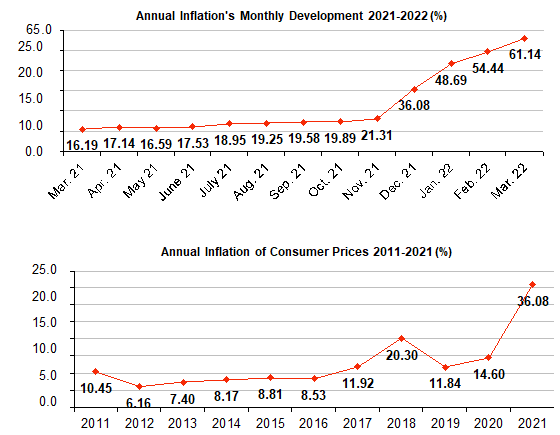