Turkish executive to become Rolls-Royce’s CEO
Tufan Erbilgiç, former CEO of BP’s downstream business, has been appointed as CEO and an executive director of Rolls-Royce Holdings plc. He is set to take office in January 2023, succeeding Warren East.
July 26, 2022

Türk Telekom and Korea Telecom agree on strategic cooperation
Turkish and South Korean telecommunication companies Türk Telekom and Korea Telecom have signed a strategic cooperation agreement including various topics, such R&D in 5G, joint investment in start-ups, and media content exchange. The two companies had signed a memorandum of understanding for cooperation at the Mobile World Congress in March.
Aug. 6, 2022

Hoshizaki increases stake in Öztiryakiler
Japanese Hoskizaki Corporation has increased its stake in the Turkish industrial kitchen manufacturer Öztiryakiler to 39%. Hoshizaki had acquired 29% of the company’s shares in 2019. Following the partnership, Öztiryakiler  built a new plant which was commissioned in May. The well-established company, founded in 1958, has 1,400 employees and exports its products to more than 130 countries.
Aug. 8, 2022

Leaders of Iran, Turkey and Russia- meet in Tehran
Iran’s President Ebrahim Raisi has received his Turkish and Russian counterparts, Recep Tayyip Erdoğan and Vladimir Putin, in Tehran. In their joint declaration, the three leaders emphasized the territorial integrity of Syria and condemned the activities of terrorist organizations as well as Israel’s military attacks in Syria.
July 20, 2022

Grain coordination centre commissioned
Following the agreement of Turkey, Russia, Ukraine and the United Nations, the Joint Coordination Centre has been commissioned in Istanbul. The Centre will work on the safe transportation of grain from Ukrainian ports to the world market.
July 27, 2022

Turkey and Ukraine sign infrastructure agreement
Volodymyr Zelenskyy, the President of Ukraine, Turkish President Erdoğan and António Guterres, Secretary-General of the United Nations, have met in Lviv, Ukraine. Erdoğan voiced his concerns about the armed conflicts around the Zaporizhzhia Nuclear Power Plant. Turkey and Ukraine also reached an agreement regarding the reconstruction of the country’s infrastructure destroyed by the war.
Aug. 19, 2022

Industrial production continues to grow
In June, Turkey’s industrial production index went up by 8.5% YOY, with the manufacturing industry recording an increment of 10.0%. The highest increases in the manufacturing industry category occurred in the product groups “leather and related products” (49.8%), “wearing apparel” (41.4%), and “basic pharmaceutical products and pharmaceutical preparations” (37.2%). The only decrease was reported in the product group “basic metals” (-5.3%).
Aug. 12, 2022

Moody’s lowers Turkey’s rating
The credit rating agency Moody’s has lowered Turkey’s credit rating to non-investment grade B3 while changing the country’s outlook from negative to stable. The agency emphasized rising pressures on Turkey’s balance of payments and increasingly unorthodox measures taken by the authorities to stabilize the currency and restore foreign-currency buffers.
Aug. 12, 2022

Turkish Central Bank reduces interest rate
The Central Bank of the Republic of Turkey has reduced its policy rate (the one-week repo auction rate) from 14.00% to 13.00%. The bank stated that it “expects the disinflation process to start on the back of measures taken and decisively implemented for strengthening sustainable price and financial stability along with the resolution of the ongoing regional conflict.”
Aug. 18, 2022 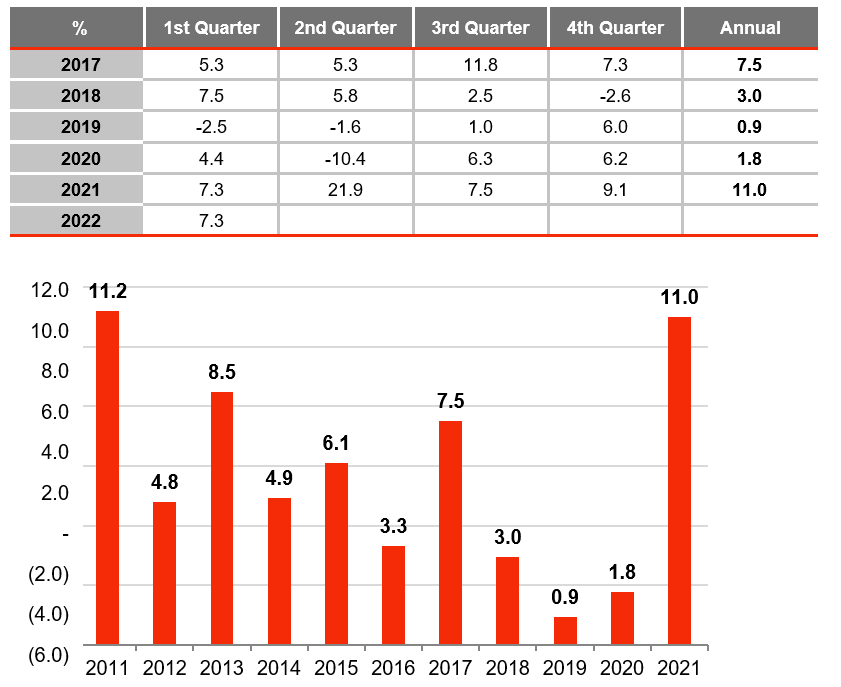