Hyosung to increase capacity in Turkey
South Korean Hyosung Corporation has announced that it shall invest KRW 60 bn (approx. EUR 45,5 mn) in its textile manufacturing plant in Çerkezköy (Tekirdağ province) for capacity expansion. The current annual Lycra production capacity of 15,000 metres is planned to double following the investment. At present, Hyosung employs 350 people in the Çerkezköy plant built on an area of 87,000 sqm.
Nov. 11, 2020

Deadlines for Electronic Message Management System extended
The Turkish Ministry of Trade has announced new deadlines to register with the Electronic Message Management System (İYS). Now service providers with more than 150,000 commercial electronic message consents are required to complete the registration and upload process by Dec. 31, 2020, and those with 150,000 or less by May 31, 2021.
Dec. 1, 2020

Netflix opens office in Turkey
Netflix has declared that it will open an office in Turkey in the second half of 2021. Reed Hastings, founder and CEO of the media company, stated that this office will help them create more Turkish productions to be watched globally, and thanked their more than 3 million Turkish subscribers. Turkey’s Radio and Television Supreme Council (RTÜK) had issued a webcasting license to Netflix in November, granting RTÜK the right to carry out inspections of the content of the platform’s catalogue.
Dec. 3, 2020

Saudi Arabia suspends animal product imports from Turkey
Saudi Arabia has suspended all imports of poultry and red meat products, eggs, seafood, honey and milk from Turkey as of November 15. The deterioration in the relations between the two countries had become explicit in October when the head of Saudi Arabia’s Chambers of Commerce called for a boycott of Turkish goods. Turkey’s total exports to Saudi Arabia decreased by 29.0% to USD 2.3 bn in the first ten months of 2020, compared with the same period of 2019.
Nov. 14, 2020

German warship raids Turkish freighter
The Turkish cargo ship Rosaline A, carrying various goods such as food and paint to Libya, has been intercepted in waters southwest of Greece by a German frigate commissioned in Operation Irini of the EU Naval Force. A search for possible breach of the arms embargo was abandoned when Turkey raised its objection. Mevlüt Çavuşoğlu, Turkish Minister of Foreign Affairs, denounced this action as contrary to international law, saying that Turkey will retaliate, while the German government said they were following agreed procedure.
Nov. 24, 2020

Turkey and Qatar sign agreements including transfer of 10% in Stock Exchange
In Ankara, ten agreements have been signed between Turkey and Qatar in the presence of Turkish President Recep Tayyip Erdoğan and Sheikh Tamim bin Hamad al-Thani, the Emir of Qatar. Pursuant to this, 10% shares of Borsa Istanbul, the Turkish Stock Exchange, have been acquired by the Qatar Investment Authority. Other transactions included the transfer of shares in the Istinye Park shopping mall in Istanbul, owned by Doğuş Holding, and the operating rights of Antalya port, owned by Global Yatırım Holding.
Nov. 27, 2020

Ministry of Interior declares new coronavirus measures
Within the scope of new measures announced by the Turkish Ministry of the Interior against the coronavirus pandemic, a curfew from 9 pm to 5 am on weekdays, and from 9 pm on Friday until 5 am on Monday has been imposed. Citizens are only allowed to walk to nearby shopping facilities such as supermarkets and bakeries. Restaurants may provide takeaway and delivery service only. Citizens over the age of 65 and under the age of 20 are allowed to go out at certain hours during the day, but prohibited from using public transportation.
Dec. 1, 2020

No broad sanctions against Turkey after EU summit
In the final declaration of the European Union leaders’ summit held in Brussels, it has been emphasized that the tensions between Greece and Turkey need to be decreased in order to restart negotiations between the two countries, and the EU strategically benefits from fostering its relations with Turkey. Despite a proposal for extending the existing list of limited sanctions against Turkey’s gas exploration operations in the Eastern Mediterranean, the summit did not impose broad economic sanctions or an arms embargo.
Dec. 11, 2020

U.S. imposes sanctions against Turkey
Even though outgoing U.S. President Donald Trump had announced that he would veto the defence bill which paves the way for sanctions against Turkey due to its purchase of the Russian S-400 missile system, some sanctions have been imposed by the U.S. Treasury Department. These sanctions target Turkey’s Department of Defence Industries (SSB), its head İsmail Demir and other top officers, and include a ban on all U.S. export licenses and authorizations of SSB, an asset freeze, and visa restrictions, as Secretary of State Mike Pompeo stated.
Dec. 14, 2020

Turkish Central Bank increases the interest rate
The Central Bank of the Republic of Turkey has increased its policy rate (one-week repo auction rate) to 15.00%, up from 10.25%. The bank stated that “the lagged effects of depreciation in Turkish lira, increasing international food prices and deterioration in inflation expectations affect the inflation outlook adversely”. Hence, the bank has decided to implement a transparent and strong monetary tightening.
Nov. 19, 2020

Industrial production increases by 10.2%
Turkey’s industrial production index in October went up by 10.2% YOY, with the manufacturing industry recording an increment of 11.0%. The highest increases in the manufacturing industry category took place in the product groups “basic pharmaceutical products and pharmaceutical preparations” (26.1%), “wood and products of wood and cork” (23.6%), and “electrical equipment” (21.7%). The highest decreases, on the other hand, were reported in “other transport equipment” (-23.6%), “coke and refined petroleum products” (-7.8%), and “leather and related products” (-7.7%).
Dec. 14, 2020 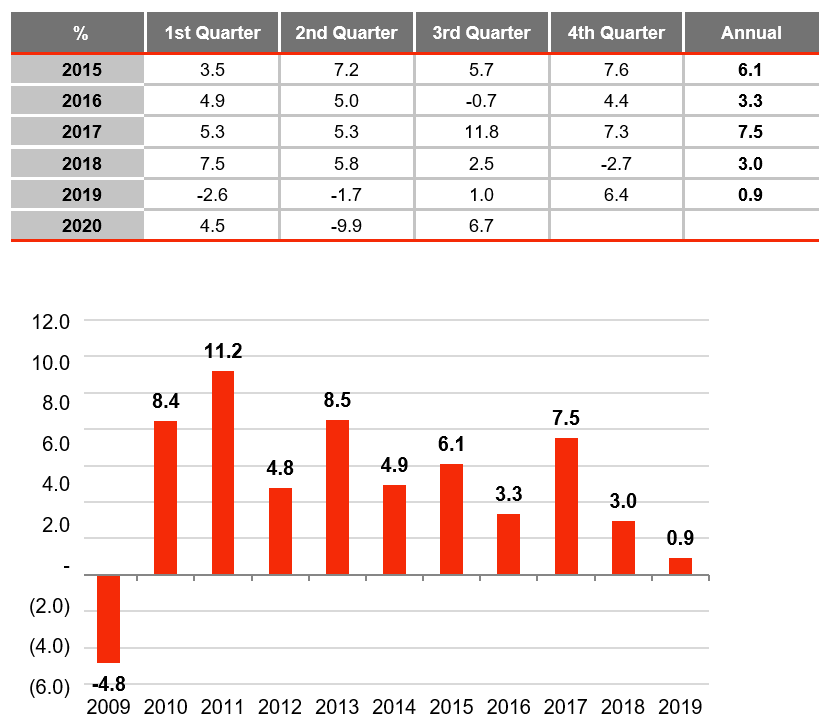 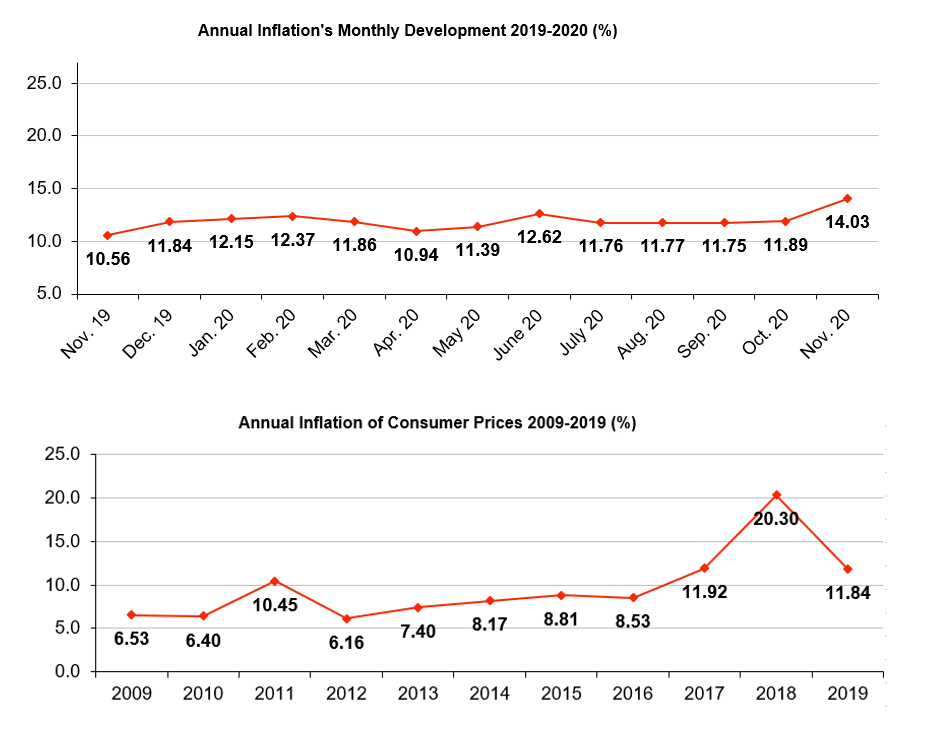