International M&As down 55% in 2019
Deloitte has reported that the volume of M&As in Turkey has dropped by as high as 56% to USD 5.3 bn in 2019. There were 233 mergers and acquisitions, with the transaction volume of foreign investors being 55% lower compared to 2018, decreasing to USD 3.4 bn. Europeans were the main actors among foreign investors in terms of both the number of deals, with a 61% share, and the deal volume, with 40%. Last year’s major transactions with foreign participation were China Merchants Group (PRC) – Third Bosphorus Bridge and Northern Marmara Motorway, Mayhoola (Qatar) – Boyner Perakende ve Tekstil, and Eaton (USA) – Ulusoy Elektrik.
Jan. 8, 2020

Home sales decrease by 1.9% in 2019
Despite a sharp increase in December, owing to tax incentives and decreasing interest rates, which took the monthly home sales volume to a record high of 202,074, the annual sales volume decreased by 1.9%, down to 1,348,729, in 2019. One fourth of the annual sale volume was mortgaged sales. Home sales to foreign citizens increased by 15% in 2019, with the leading countries being Iraq, Iran, and Russia, in that order.
Jan. 16, 2020

EBRD will continue to invest in Turkey in 2020
Arvid Tuerkner, the Managing Director for Turkey at the European Bank for Reconstruction and Development (EBRD), stated that the bank invested EUR 1 bn in 35 projects in Turkey in 2019, and that he expects the volume to increase this year, in parallel with the economic growth. He added that the bank will continue to focus on renewable energy projects, and also explore opportunities in Islamic finance products.
Jan. 17, 2020

1.4% fewer company formations in 2019
According to the statistics announced by the Union of Chambers and Commodity Exchanges of Turkey (TOBB), the number of new company formations has decreased by 1.4% in 2019, down to 84,102, whereas the number of company closures has increased by 5.0% to 13,197. Iran, Syria, and Saudi Arabia were the main origins of the 13,669 companies established with foreign capital.
Jan. 25, 2020

Investments in start-ups exceed USD 100 mn
In 2019, angel and venture capital investments in start-ups with innovative products and services in Turkey increased by 62%. USD 101.8 mn in total were spent on 92 ventures. With his USD 38 mn investment in the shopping application Getir, Sir Michael Moritz from Silicon Valley was the top investor. Iyzico, sold to its main competitor PayU for USD 165 mn, was the venture making the largest exit in 2019.
Jan. 29, 2020

Meritus Ulaganja acquires CMC
Croatian Meritus Ulaganja has decided to merge its subsidiary Meritus Upravljanje with Turkey’s leading call centre company CMC (Customer Management Center), and acquire 70% of the shares in the new partnership. 30% of the shares will belong to UK-based private equity firm Mid Europa Partners, the current owner of CMC. Established in 2000, CMC has close to 5,000 employees in six cities in Turkey, including Istanbul.
Jan. 29, 2020

FTA with Thailand to come into effect mid-2020
The National Assembly of Thailand has approved signing a free trade agreement (FTA) with Turkey, which is planned to come into effect mid-2020. There are 37 Turkish companies in Thailand, and the trade volume between the two countries as of the first eleven months of 2019 is USD 1.2 bn. Turkey has already signed free trade agreements with 25 countries, of which 20 are in force, and 5 in the internal ratification process.
Jan. 13, 2020

Earthquake hits Elazığ
A 6.8 magnitude earthquake lasting 22 seconds has hit the province of Elazığ in Eastern Anatolia on Jan. 24 at 20:55 hrs local time. 39 people died and 45 people were rescued from collapsed buildings. The Ministry of Treasury and Finance has declared a force majeure of 3 months for taxpayers in the provinces of Elazığ and Malatya.
Jan. 27, 2020

Turkish soldiers killed in Syria
Syrian government forces opened fire on Turkish troops in Saraqib, Idlib on Feb. 3, killing seven Turkish soldiers and one civilian officer. Turkish forces retaliated from the observation posts in the region, and President Erdoğan announced that 76 Syrian “regime elements” were “neutralized” in the counterattack. One week after the first attack, Syrian forces attacked Turkish troops in Taftanaz, Idlib, killing five more soldiers. The Turkish army fought back, and according to the Turkish Defence Ministry, 101 Syrian government soldiers were “decapacitated”.
Feb. 4 – 11, 2020

Inflation continues to accelerate
In January 2020, consumer prices in Turkey increased by 1.35% in comparison to the previous month. The CPI went up by 12.15% over the same month of the previous year (YOY). The highest monthly increase was registered in miscellaneous goods and services (4.88%), ahead of food & non-alcoholic beverages (4.65%). The highest monthly decrease took place in clothing & footwear (-6.65%). The biggest annual increase by far was in alcoholic beverages & tobacco (42.21%). The domestic producer price index (D-PPI) increased by 1.84% monthly, and by 8.84% YOY.
Feb. 3, 2020

Turkish Central Bank reduces interest rate further
The Central Bank of the Republic of Turkey has reduced its policy rate (one-week repo auction rate) from 11.25% to 10.75%. According to the bank, the recovery in the economic activity continues while on the other hand investments and employment have remained weak, and external demand is tempered by a weakening global economic outlook. The bank expects both the disinflation trend and the improvement in financial conditions to persist.
Feb. 19, 2020 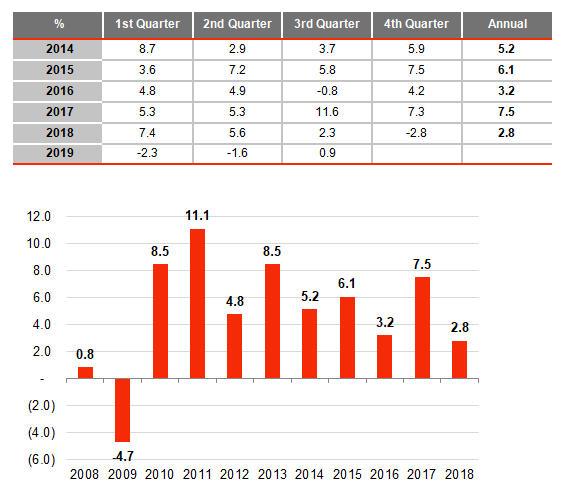 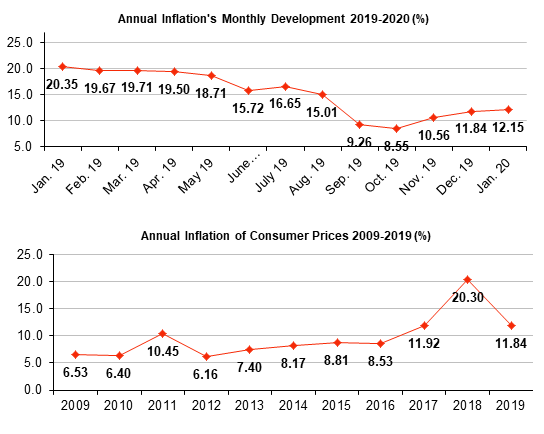