EBRD allocates record-high resource to Turkey
The European Bank for Reconstruction and Development (EBRD) invested EUR 2 bn in projects in Turkey in 2021, an all-time record high. 85% of this amount was allocated to the private sector, and 55% to projects supporting sustainability. Arvid Tuerkner, EBRD Managing Director for Turkey, stated that the high inflation creates a more difficult environment for investments; on the other hand, the ratification of the Paris Agreement by Turkey is expected to pave the way for more green investments.
Jan. 29, 2022

Ukraine and Turkey sign FTA
Turkish President Recep Tayyip Erdoğan has met with Ukraine’s President Volodymyr Zelensky in Kyiv. A free trade agreement (FTA) and other agreements regarding cooperation in several topics were signed during the visit. According to the FTA, the quotas in road transportation between the two countries were lifted. Erdoğan emphasized the target to raise the mutual trade volume to USD 10 bn from the current level of USD 7.5 bn. Regarding the conflict between Russia and Ukraine, the President reiterated Turkey’s support for the territorial integrity of Ukraine.
Feb. 4, 2022

Turkish Central Bank keeps interest rate constant
The Central Bank of the Republic of Turkey has kept its policy rate (the one-week repo auction rate) constant at 14.00%. The bank stated that it “expects the disinflation process to start on the back of measures taken for sustainable price and financial stability along with the decline in inflation owing to the base effect.”
Jan. 20, 2022

Inflation increases sharply
In January 2022, induced mainly by the depreciation of the Turkish lira, consumer prices in Turkey rose by as high as 11.10% in comparison to the previous month, and the CPI went up by 48.69% YOY. The highest monthly increment was registered in alcoholic beverages and tobacco (21.90%), followed by housing (18.91%). The only decrease among the main product groups occurred in clothing and footwear with -0.24%. The biggest annual price increase was in transportation (68.89%). The domestic producer price index (D-PPI) rose by 10.45% monthly, and by 93.53% YOY.
Feb. 3, 2022

Foreign companies take 9% share in investments
According to the investment incentive statistics, the total amount of fixed investments stood at USD 274.9 bn in 2021, close to the level of the previous year (USD 275.6 bn). The share of foreign capital companies was 9%. The manufacturing industry accounted for 67% of the fixed investment amount, followed by service sector with 17%.
Feb. 7, 2022

Industrial production keeps gaining
Turkey’s industrial production index in December went up by 14.4% YOY, with the manufacturing industry recording an increment of 16.2%. The highest increases in the manufacturing industry category occurred in the product groups “other transport equipment” (81.2%), “computer, electronic and optical products” (62.7%), and “leather and related products” (33.0%). The only decrease was reported in “motor vehicles, trailers and semi-trailers” (-0.3%).
Feb. 11, 2022

New government supports announced
The Turkish government has announced new supports to the economy. The VAT rate on basic foodstuffs has been cut from 8% to 1%. Besides, the Credit Guarantee Fund is to provide financial support of TRY 60 bn for exports, investments, and working capital. Furthermore, in order to integrate under-the-mattress savings into the economy, a new gold deposit account system has been introduced.
Feb. 14, 2022 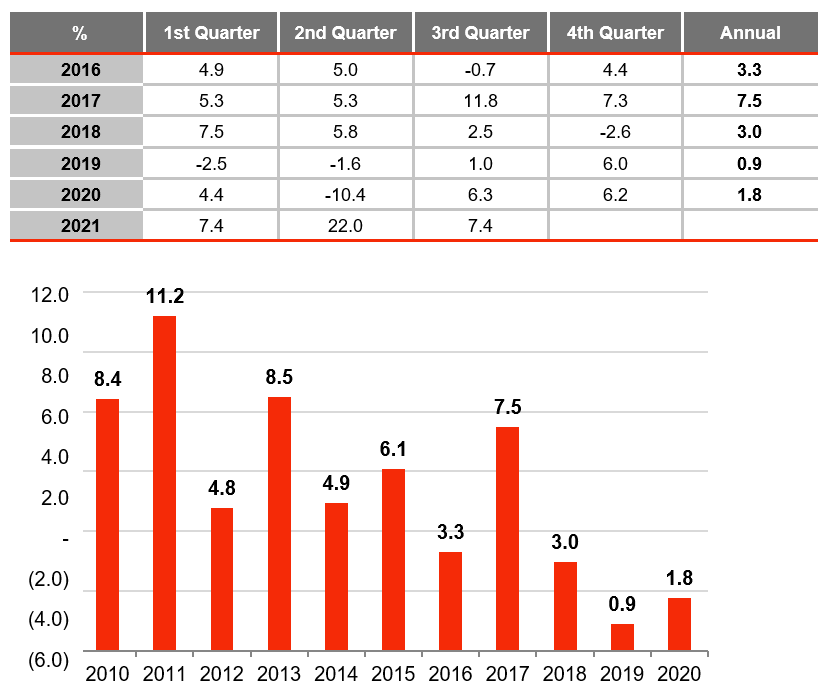 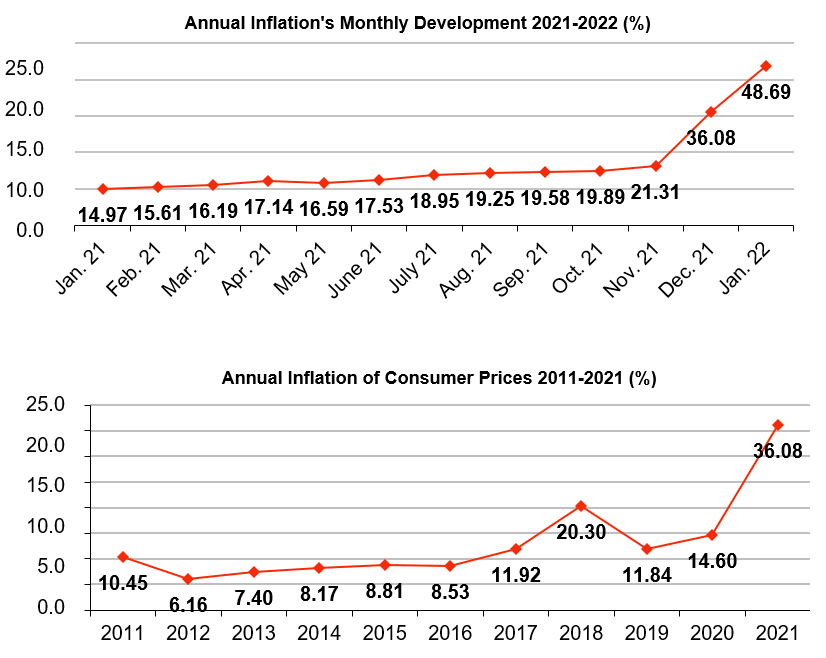