SunExpress invests in aircraft maintenance centre
SunExpress, the 30-year-old joint venture of Lufthansa and Turkish Airlines, has announced the opening of a new aircraft maintenance centre in Antalya by 2021, following a EUR 35 mn investment. The centre is to provide service also to other airline companies. SunExpress operates a fleet of 84 aircraft, and has more than 4,200 employees in 35 countries.
Dec. 4, 2019

Afiniti plans to hire 50 AI engineers
Multinational software company Afiniti, which is focused on behavioural artificial intelligence, has decided to position its office in Turkey, established two years ago, as its global operation centre. Anna Sedgley, Head of Customer Finance and Advisory Board at Afiniti, explained that this decision was driven by the high quality and lower cost of the engineering education in Turkey compared to countries such as the UK. She added that the Turkish banking sector is ahead of many Western countries in terms of digitalization. Afiniti plans to hire 50 artificial intelligence research personnel and engineers in 2020.
Dec. 5, 2019

Pınar Abay put in charge of Benelux countries
Ms. Pınar Abay, Turkey General Manager of Dutch ING bank, has been appointed as ING Group’s Global Executive Board Member in charge of Belgium, the Netherlands, and Luxembourg. ING Group’s CEO Ralph Hamers stated that ING Turkey has become a digital and innovative organization thanks to Abay’s leadership, and that her in-depth knowledge as well as focus on customers and employees would make a valuable contribution to the integration process of their banking business in the Netherlands and Belgium.
Dec. 24, 2019

Turkey’s “national automobile” presented
The prototype of the car developed by a consortium of domestic manufacturers under the name of “TOGG” has been presented in an official ceremony, where the SUV model was test-driven by Turkish President Recep Tayyip Erdoğan. The manufacturing facility to be built in Gemlik (Bursa province), is scheduled to become operational in 2022. The plant is expected to create 4,300 jobs, or 20,000 including suppliers. The electrical vehicle is to be charged in less than 30 minutes, with a range of 500 km on a single charge.
Dec. 28, 2019

Gross minimum wage raised to TRY 2,943
The relevant committee has announced the minimum wage negotiated for 2020: With a 15.03% increase compared to the previous year, it now amounts to TRY 2,943 gross, or TRY 2,324.70 net. In addition, a so-called minimum living allowance is being paid which starts at TRY 220.73 (for unmarried employees without children).
Dec. 28, 2019

Turkish Stream put into operation
“Turkish Stream”, the pipeline to convey Russian natural gas both to Turkey and through Turkey to Europe, has been inaugurated by an official ceremony held in Istanbul with the participation of the presidents of Turkey, Russia and Serbia, and the prime minister of Bulgaria. The pipeline has a total capacity of 31.5 billion cubic meters per year, of which 15.75 billion cubic meters are to be consumed in Turkey.
Jan. 9, 2020

Trump signs bill including sanctions against Turkey
U.S. President Donald Trump has signed a defence bill which includes sanctions against Turkey due to its purchase of Russian S-400 missiles. Accordingly, the delivery of F-35 fighter jets or their support equipment to Turkey has been banned, and further sanctions under the Countering America’s Adversaries Through Sanctions Act (CAATSA) were recommended. Furthermore, as measure against Russian energy exports, additional sanctions shall be imposed on ships employed in the pipeline projects Nord Stream 2 and Turkish Stream.
Dec. 21, 2019

Turkey to send troops to Libya
The Turkish parliament has approved a resolution allowing the dispatch of troops to Libya for a period of one year. According to President Erdoğan, their mission will be to ensure stability for the UN-backed Government of National Accord in Tripoli, and the first troops have already begun moving to Libya.
Jan. 3 – 6, 2020

Turkish Central Bank reduces interest rate further
The Central Bank of the Republic of Turkey has reduced its policy rate (one-week repo auction rate) from 12.00% to 11.25%. According to the bank, the recovery in the economic activity continues while on the other hand investment demand has remained weak, and external demand is tempered by a weakening global economic outlook. The bank expects both the disinflation trend and the improvement in financial conditions to persist.
Jan. 16, 2020 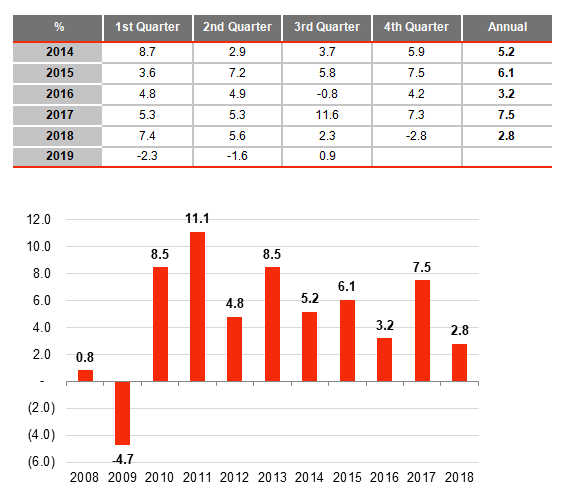 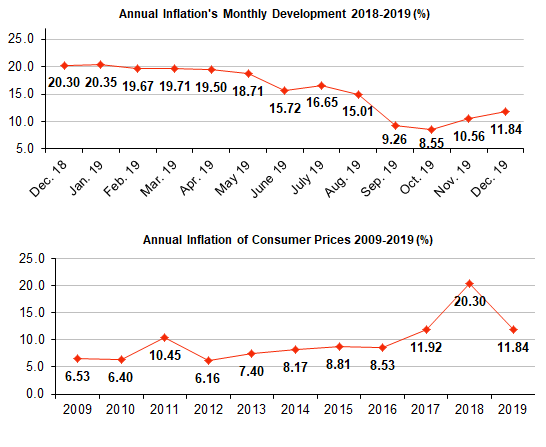