Mikel Coffee to expand considerably in Turkey
Internationally successful Greek café chain Mikel Coffee plans to expand to 120 coffee shops and 1,000 employees in Turkey in the next five years. The company, which entered the Turkish market in June 2020, is already operating 12 shops.
Dec. 31, 2021

International M&As up 12% in 2021
Business consultancy Deloitte has reported a 12% increase in the volume of M&As in Turkey over 2020 to USD 10.1 bn in 2021. There were 390 mergers and acquisitions, with the transaction volume of foreign investors increasing to USD 5.9 bn, 28% more than in the previous year. North American investors led the deal volume with a share of 62%, followed by European investors with 29%. Last year’s major transactions were the investments in the e-commerce giants Trendyol and Getir, which together made up 20% of the total deal volume.
Jan. 1, 2022

Turkey’s “national automobile” showcased in Las Vegas
A prototype of the sedan model of the line of electric cars developed by a consortium of domestic manufacturers under the brand name of “TOGG” has been presented at the Consumer Electronics Show in Las Vegas. Gürcan Karakaş, TOGG’s CEO, announced his company’s target of producing 1 million cars in five different segments by 2030. The first, a C-segment SUV model, is due on the market in the first quarter of 2023.
Jan. 6, 2022

Bosch Rexroth commissions design centre
Automation and engineering company Bosch Rexroth has commissioned its new design centre in Bursa. The company aims at increasing the number of engineers to 26 by the end of this year from the current figure of 15. Manfred Hahn, Bosch Rexroth Technical General Manager, stated that their stable performance since 2005 has resulted from the efforts of their Turkish engineers, and that the centre shall be transformed into an R&D centre in the next years. Bosch Rexroth already employs 1,400 people in Bursa.
Jan. 12, 2022

Tax bases for excise duty on new cars revised
The tax base limits for the special excise duty (ÖTV) for cars with engines up to 1600 cc and hybrid vehicles have been revised. This is expected to lower the price of some models by up to 17%, thereby helping to stimulate sales.
Jan. 13, 2022

Turkish vaccine TURKOVAC in use
The domestically developed and produced Covid-19 vaccine TURKOVAC has begun to be implemented in public hospitals in Turkey, after having received emergency use authorization. The Turkish Minister of Health, Fahrettin Koca, also got his shot of the home-grown vaccine in front of the cameras.
Dec. 30, 2021

Net minimum wage raised by 50%
Turkish President Recep Tayyip Erdoğan has announced the minimum wage for 2022: With a 50% increase compared to the previous year, it now amounts to TRY 4,253.40 net and TRY 5,004.00 gross. The cost to the employer is TRY 5,879.70. The income tax and stamp tax on the minimum wage have been lifted. Furthermore, the portion of all employee salaries up to the amount of the minimum wage shall benefit from the tax exemption.
Dec. 17-21, 2021

Inflation hits highest since 2002
In December 2021, induced mainly by the depreciation of the Turkish lira, consumer prices in Turkey rose by as high as 13.58% in comparison to the previous month, with the CPI going up by 36.08% YOY, the highest level since October 2002. The highest monthly rise was registered in transportation (28.49%), followed by furnishings and household equipment (16.54%). No decrease occurred among the main product groups. The biggest annual price increase was in transportation (53.66%). The domestic producer price index (D-PPI) rose by 19.08% monthly, and by 79.89% YOY.
Jan. 3, 2022

Turkish lira deposit tool introduced
A new deposit account system has been introduced to protect the Turkish currency against depreciation. According to this FX-protected deposit account system, the Turkish Treasury will reimburse depositors for the difference between the foreign exchange rate at the beginning and the end of the maturity if the lira’s depreciation exceeds the interest rate. There are maturity options of three, six, nine or twelve months. The Turkish lira appreciated sharply following introduction of the system. A similar incentive has been provided also to gold deposit accounts converted to Turkish lira deposit accounts. Subsequently, besides natural persons, legal persons have also been included in the system.
Dec. 22, 2021-Jan. 12, 2022

Industrial production gains 11.4%
Turkey’s industrial production index in November went up by 11.4% YOY, with the manufacturing industry recording an increment of 12.5%. The highest increases in the manufacturing industry category occurred in the product groups “other transport equipment” (30.7%), “printing and reproduction of recorded media” (29.2%), and “beverages” (28.5%). Decreases were reported in “computer, electronic and optical products” (-8.5%) and “basic pharmaceutical products & pharmaceutical preparations” (-6.3%).
Jan. 13, 2022 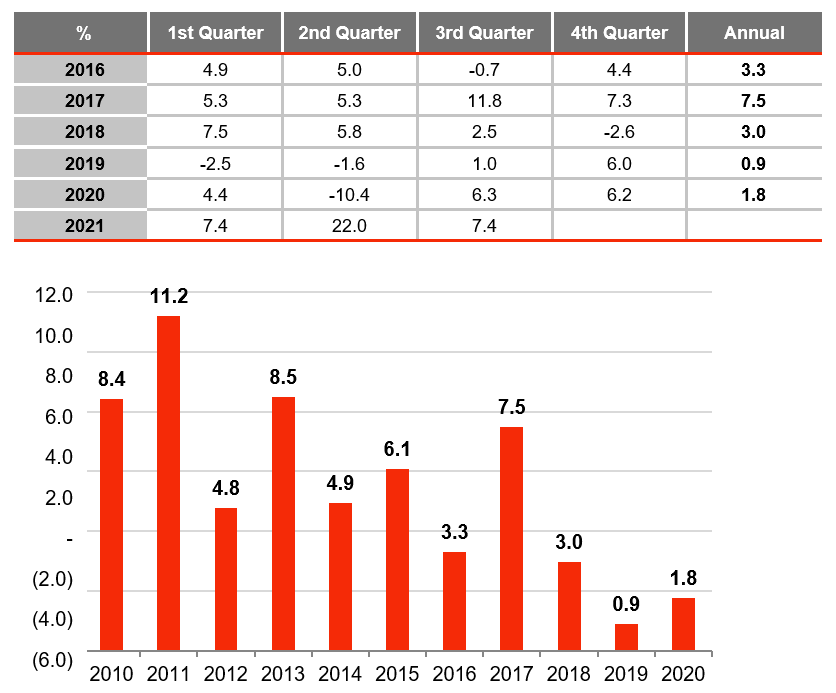 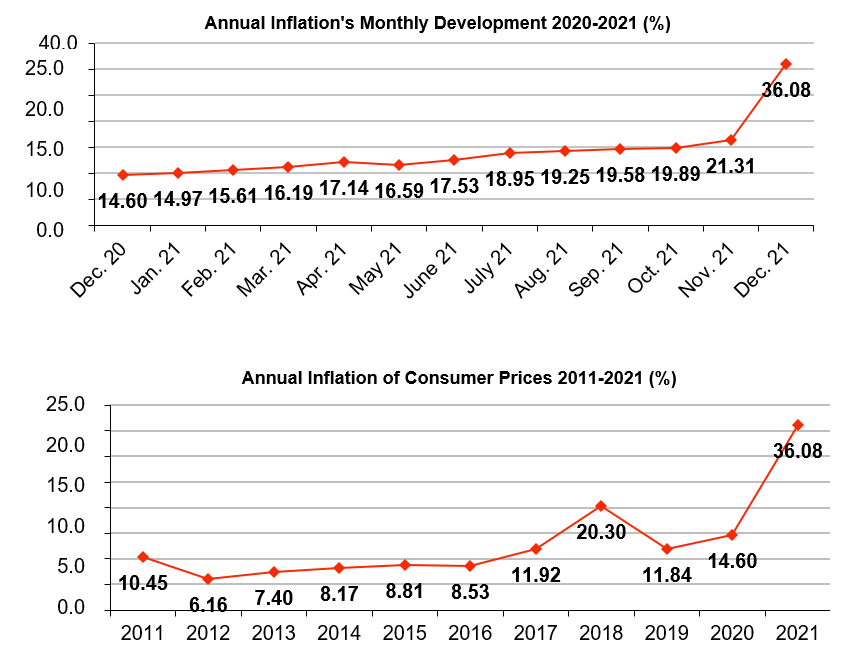