Schattdecor to further invest in its Turkish plant
The Bavarian company Schattdecor, a producer of decors and surfaces for the woodworking products industry, is going to build a new warehouse in its plant in Kocaeli in 2023 with an investment of TRY 100 mn. Selçuk Ülger, General Manager of Schattdecor Turkey, said that they will be focusing on North Africa and Eastern Europe to develop new markets.
Dec. 19, 2022

Retirement age requirement dropped
The Turkish government has finally yielded to demands to abolish the retirement age requirement for citizens who officially entered employment before September 8th, 1999, when the law regulating retirement requirements was changed. Through this move, more than 2.2 million Turkish citizens have become eligible to retire immediately. It has been calculated that the new system will cost the treasury in excess of TRY 100 bn.
Dec. 29, 2022

Borusan EnBW to invest massively in EV charging network
Borusan EnBW, a partnership of Turkish Borusan Holding and German EnBW AG, has started its activity as electric vehicle charging network operator. The company is planning to provide service in more than 500 locations initially, and to extend it to 7,000 locations following its investments. The investment volume is expected to reach TRY 5 bn by 2030.
Jan. 12, 2023

Significantly more international M&As in 2022
Business consultancy Deloitte has reported a 14% increase in the volume of M&As in Turkey over 2021 to USD 11.5 bn in 2022. In total there were 450 mergers and acquisitions, with the transaction volume of foreign investors slightly decreasing to USD 5.7 bn, 3% less than in the previous year. Gulf investors led the deal volume with a share of 41%, closely followed by European investors with 39%. The largest deal sealed by a foreign investor was BBVA’s acquisition to increase its stakes in Garanti Bank with almost USD 1.5 bn. The investment round led by Mubadala of UAE into the e-commerce giant Getir came second, with USD 768 mn.
Dec. 16, 2022 – Jan. 13, 2023

Erdoğan meets with Azerbaijan and Turkmenistan leaders
President Recep Tayyip Erdoğan has attended the Summit of Heads of State of Turkey-Azerbaijan-Turkmenistan, held in Awaza, Turkmenistan. Five mutual agreements have been signed by the three countries in areas including trade, culture, energy, and transport.
Dec. 15, 2022

Turkish Central Bank keeps interest rate constant
The Central Bank of the Republic of Turkey has kept its policy rate (the one-week repo auction rate) constant at 9.00%. According to the bank’s statement, the current policy rate is adequate considering the increasing risks with respect to the global demand.
Dec. 22, 2022

Non-seasonally adjusted unemployment remains unchanged
In November 2022, some 3,504,000 people in Turkey aged 15 and older were officially out of work. The non-seasonally adjusted unemployment rate of 9.9% was the same as in the previous month but amounted to a decrease of 1.0 points YOY. The labour force participation rate increased to 54.4% in total, and to 32.2% for females.
Jan. 10, 2023

Industrial production decreases by 1.3%
In November, Turkey’s industrial production index has decreased by 1.3% YOY, with the manufacturing industry recording a contraction of 0.4%. The biggest increases in the manufacturing industry category occurred in the product groups “computer, electronic and optical products” (73.1%), “leather and related products” (32.8%), and “other transport equipment” (16.7%). The highest decreases were reported in the product groups “basic metals” (-20.5%), “textiles” (-18.7%), and “paper and paper products” (-9.0%).
Jan. 10, 2023 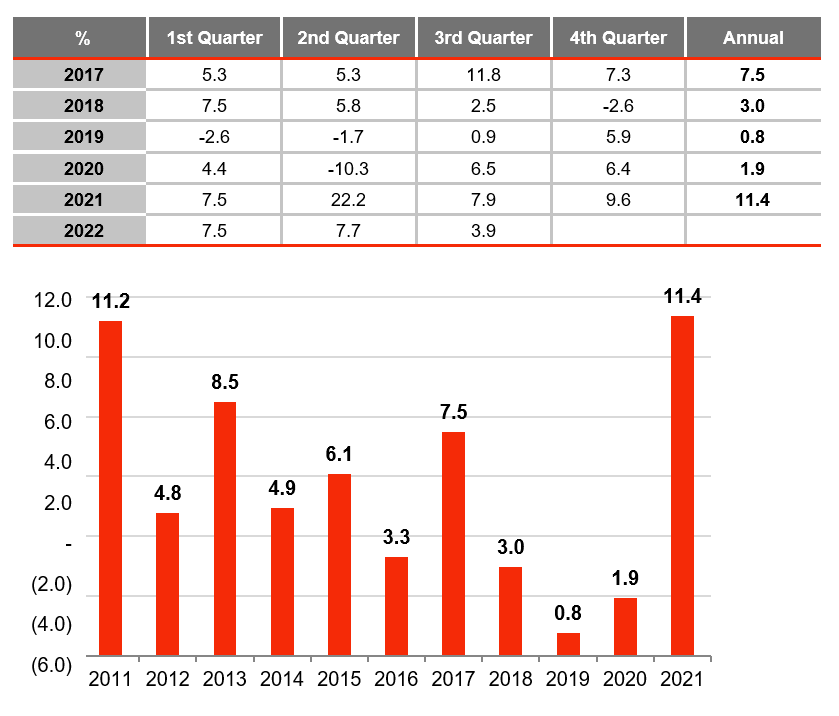 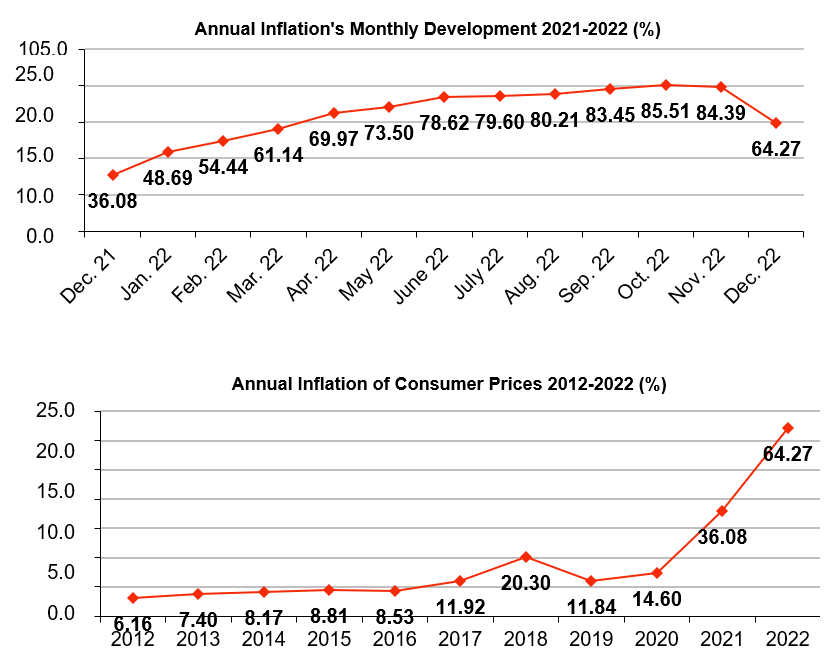