Banque Syz opens office in Turkey
Swiss banking group Banque SYZ SA has opened a representative office in Istanbul. Nicolas Syz, Head of SYZ Private Banking, stated that they see this not only as an opportunity to be closer to customers in the region, but also to better understand the market conditions and investment potential in Turkey.
June 4, 2020

New incentives for technology investments in free zones
According to a new regulation issued on June 9, R&D-intensive and high-technology investments in free zones in Turkey shall be eligible for various new incentives. As of now, 50% of the gross salaries of up to ten employees (max. USD 15,000 per employee), 50% of the rental expenses for land and buildings (max. USD 75,000 per year), as well as 50% of the interest and expenses for investment loans up to USD 10 mn shall be met by the state.
June 10, 2020

German companies concerned about decreasing domestic demand in Turkey
According to a survey carried out among the 900-plus members of the German-Turkish Chamber of Trade and Industry (AHK) in June, 70% of the respondents stated that the main impact of the coronavirus pandemic on business has been the decline in domestic demand. A decrease in the planned investment budgets for 2020 (52%) and lower demand by the EU countries (51%) have been the other major impacts. 33% of the respondents expect that their business will normalize in the last quarter of this year, whereas 31% expect this to happen in 2021. 31% anticipate a 10-25% decrease in their turnover in 2020, and 26% a 25-50% decrease.
June 26, 2020

New customs duties on several hundred product groups
In order to mitigate the negative effects of the coronavirus pandemic on Turkey’s economy and to protect the domestic industry against the increasing pressure by imports, a new presidential decree was issued on June 28. Accordingly, additional customs duties of up to 20 % have been imposed on 445 more product groups, which include dental prostheses, pearls, air conditioners, welding machines, machine tools, textile machines, and adhesives. As from September 30, the new duties will be reduced by 10 percentage points.
June 29, 2020

Short-time compensation and ban on dismissals extended for another month
The duration of the regulation allowing companies which had been forced to discontinue their activities due to the coronavirus pandemic to benefit from short-time compensation for their employees has been extended for another month. In parallel, the ban on dismissals has also been extended.
June 30, 2020

First Turkish-manufactured electrical train to be in operation soon
The plant tests of the first domestically manufactured electrical train have begun  at the Turkish wagon manufacturer TÜVASAŞ in Adapazarı (Sakarya province). Following the completion of the plant tests, railway tests are planned to be started at the end of August, and passenger transportation will start soon. The train sets have an operational speed of 160 km/h.
June 30, 2020

New occupational health and safety obligations to be postponed
New articles of the Occupational Health and Safety Law have entered into force as of July 1. Accordingly, also companies with less than 50 employees and in the less dangerous category, as well as state institutions, are now obliged to provide occupational health and safety services, by either employing trained personnel or procuring this service from a specialist. However, according to a draft bill approved by the Parliament’s Planning and Budget Commission, these obligations are to be postponed until Dec. 31, 2023.
July 1-18, 2020

VW suspends new investment in Turkey
German automotive giant Volkswagen AG has announced that its factory investment plan in Turkey has been cancelled, as all new factory investments have been suspended globally due to the coronavirus pandemic and no additional production facilities are required in the next few years. The projected plant with a capacity of 300,000 vehicles per year was to produce and export VW Passat and Škoda Superb model passenger cars. Due to Turkey’s military operation in Syria in October 2019, the investment decision had already been put on hold.
July 2, 2020

Investigation launched against German automotive producers
The Turkish Competition Authority has launched an investigation against German automotive producers Audi, Porsche, Volkswagen, Mercedes-Benz, and BMW (Circle of Five). The Authority stated that “the findings concerning the following claims were significant and sufficient: under the scope of safety cooperation between the Circle of Five, the maximum speed at which adaptive cruise control can work and the maximum speed at which roofs can be opened and closed was set; within the scope of the cooperation for environment, the use of petrol particulate filter was prevented and its roll-out was delayed, competition-sensitive information regarding SCR technology was shared, and the size of the AdBlue tank was determined”.
July 2, 2020

U.S. initiates investigation on digital service tax
The United States is conducting an investigation against several countries including Turkey that have introduced a digital service tax on services of U.S. technology giants such as Facebook, Google, and Netflix. The countries concerned were requested to submit their written comments to the U.S. authorities by July 15.
June 4, 2020

Turkish steel industry reacts against protectionist measures by EU
The European Commission has introduced several measures to protect the European steel industry, which have taken effect as of July 1. Turkey’s Steel Producers Association (TÇÜD) claims that the new system will cut Turkish steel exports by 58%, and that countermeasures are necessary. The Turkish Ministry of Trade had already applied to the World Trade Organization on May 25 to introduce additional customs duties of 9-17% on steel imports from the EU countries in case the EU does not review its quotas. Furthermore, the deadline of additional customs duties of 2-5 percentage points on more than 260 steel products as introduced on April 18 has been extended from July 15 to September 30.
July 7-15, 2020

New bar associations law passed
The majority of the Turkish parliament has approved a bill allowing the establishment of multiple concurrent bar associations in each province. There have been massive nationwide protests by lawyers against this reorganisation, claiming that this will decrease the power of the existing associations and undermine judicial independence.
July 11, 2020

Hagia Sophia reconverted into mosque
Turkey’s Council of State, the country’s supreme administrative court, has annulled the 1934 decree signed by the Republic’s founder Mustafa Kemal Atatürk that secularized Hagia Sophia into a museum. Consequently, the nearly 1,500-year-old structure, originally built as the largest cathedral of Christianity, and converted into a mosque following the conquest of Istanbul by the Ottoman Empire in 1453, will be again used as Islamic place of worship from July 24 on.
July 11, 2020

Turkish Central Bank keeps interest rate stable
The Central Bank of the Republic of Turkey has kept its policy rate (one-week repo auction rate) at 8.25%. According to the bank, economic recovery has started in May following gradual steps towards normalization. Even though exports and tourism revenues have declined due to the pandemic, the recovery in exports of goods and low levels of commodity prices will support the current account balance in the forthcoming period. Pandemic-related rise in unit costs have led to some increase in the trends of core inflation indicators, and food inflation has risen due to seasonal and pandemic-related effects. Demand-driven disinflationary effects will be more prevalent in the second half of the year.
June 25, 2020

Inflation accelerates
In June 2020, consumer prices in Turkey increased by 1.13% in comparison to the previous month. The CPI went up by 12.62% YOY. The highest monthly rise was registered in transportation (4.49%), ahead of hotels, cafés and restaurants (2.83%). The only expenditure group that reported a drop was food & non-alcoholic beverages with -1.60%. The biggest annual increase by far was in alcoholic beverages & tobacco (22.41%). The domestic producer price index (D-PPI) increased by 0.69% monthly, and by 6.17% YOY.
July 3, 2020

Coronavirus impact on industry continues in May
Even though the impact of the Coronavirus lockdown on production levels was less severe compared to April, Turkey’s industrial production index in May decreased by 19.9% YOY. The worst-hit sector was the manufacture of “other transport equipment” (-56.9%), followed by the manufacture of apparel (-46.2%), leather (-37.8%), and motor vehicles (-36.8%). All sub-sectors contracted, except mining of metal ores (+7.7%), manufacture of paper and paper products (+3.6%), and computer, electronic and optical products (+2.7%).
July 13, 2020 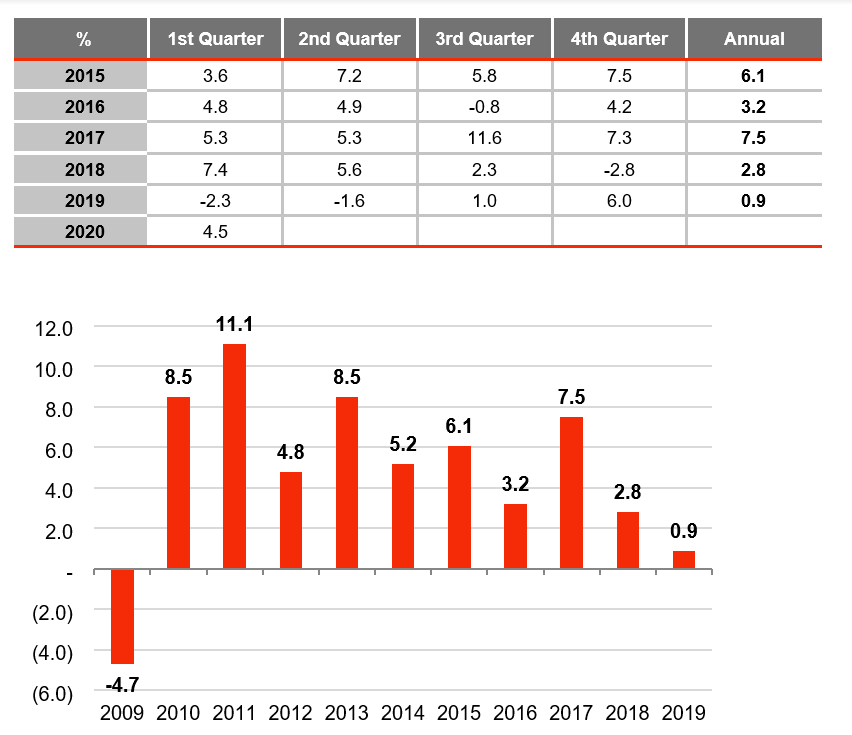