Gilead Sciences invests in Turkey
In cooperation with the Turkish producer Pharmactive İlaç, the global biotechnology company Gilead Sciences has started manufacturing hepatitis and HIV drugs in Turkey, following an investment of USD 60 mn. Thanks to this investment, the company is aiming to produce 70% of its Turkey sales volume in the country.
June 14, 2022

Hilton launches Canopy brand in Turkey
According to the agreement signed by Hilton and Turkish Çalık Holding, Hilton is going to operate with its Canopy by Hilton brand in Turkey from 2023 on, starting with the Taksim, Istanbul location. It will be the eighth brand of Hilton in Turkey, and the number of Hilton hotels in the country has reached 100.
June 16, 2022

Law on Istanbul Finance Centre in force
The Law on the Istanbul Finance Centre, which is being established on the Asian side of Istanbul, has come into force. There will be a one-stop-shop in the Centre to accelerate the application and permission process. 75% of the profit generated by the financial service exports realized at the Centre shall be deducted from the business profit in the calculation of the corporate income tax base. The deduction rate shall be 100% for the period between 2022 and 2031.
June 28, 2022

Nestlé opens fifth plant in Turkey
The food giant Nestlé has commissioned its fifth plant in Turkey in Karacabey, Bursa, following an investment of TRY 433 mn. The plant will operate under Nestlé’s Health Science division to produce enteral nutrition with an annual production capacity of 9,000 tons.
July 5, 2022

Medtronic continues to invest in Turkey
U.S. medical device company Medtronic has announced an additional investment of USD 10 mn in its innovation center in Istanbul, which had been established in 2014 following an investment of USD 25 mn. The new investment will make the center the sole center in the world providing all trainings together among the six training centers of Medtronic. 60% of the physicians receiving training in the center are from abroad.
July 6, 2022

Turkey renounces its NATO veto
At the NATO summit held in Madrid, Turkey has abandoned its policy of blocking the NATO membership of Sweden and Finland. The agreement has been reached as the two countries have promised to Turkey a cooperation regarding terrorism and lifting their arms embargo.
June 29, 2022

Erdoğan receives Draghi
President Erdoğan and Italy’s Prime Minister Mario Draghi have met in Ankara. Following their meetings, nine agreements have been signed to boost cooperation between the two countries in the fields including civil protection, sustainable development, science and technology, and SMEs.
July 5, 2022

Turkey and Malaysia sign seven agreements
President Erdoğan has received Ismail Sabri Yaakob, Prime Minister of Malaysia, in Ankara. Erdoğan stated that they target a trade volume of USD 5 bn for 2024. Seven agreements between the two countries have been signed including the fields of defence, industry and technology, healthcare, communication and media.
July 8, 2022

Turkish Central Bank keeps interest rate constant
The Central Bank of the Republic of Turkey has kept its policy rate (the one-week repo auction rate) constant at 14.00%. The bank again stated that it “expects disinflation process to start on the back of measures taken and decisively implemented for strengthening sustainable price and financial stability along with the decline in inflation owing to the base effect and the resolution of the ongoing regional conflict.”
June 23, 2022

Industrial production increases further
In May, Turkey’s industrial production index went up by 9.1% YOY, with the manufacturing industry recording an increment of 10.7%. The highest increases in the manufacturing industry category occurred in the product groups “computer, electronic and optical products” (74.9%), “leather and related products” (46.5%), and “basic pharmaceutical products and pharmaceutical preparations” (32.0%). Decreases were reported in the product groups “basic metals” (-6.3%), “electrical equipment” (-3.7%), and “fabricated metal products” (-3.0%).
July 14, 2022 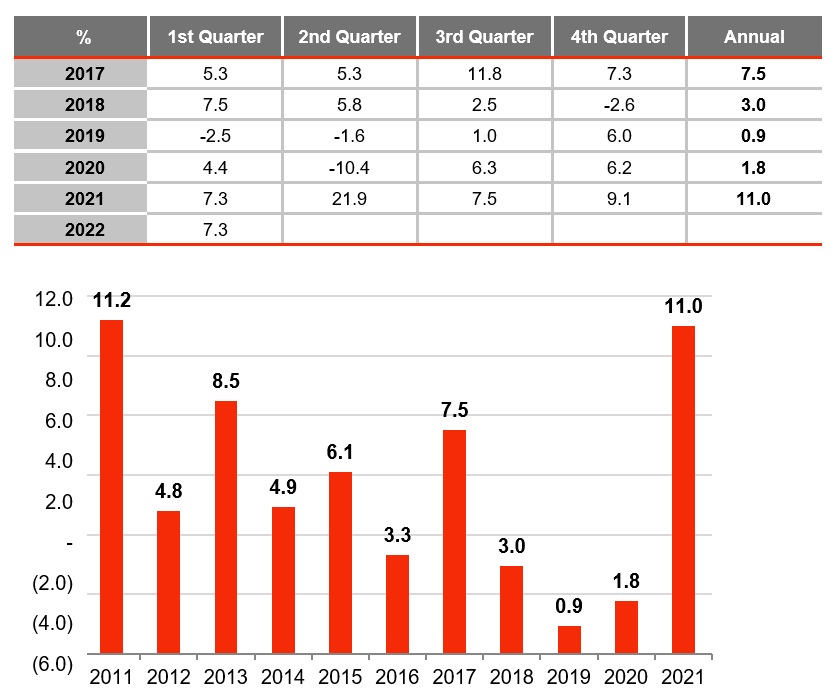 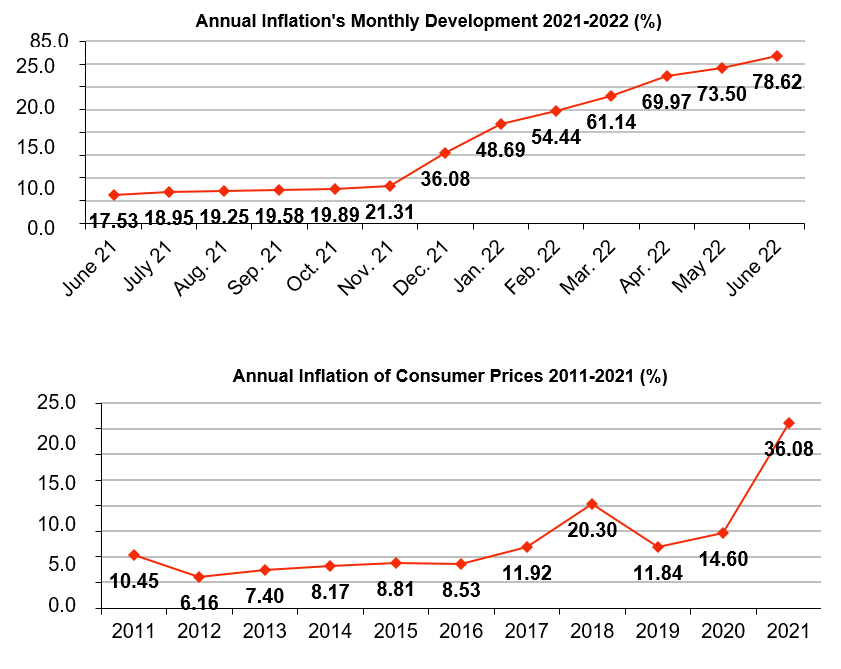