NAVTEK produces world’s first electric tugboat
Turkish ship designer NAVTEK has delivered the world’s first all-electric harbour tugboat. The boat has 32 tons of hauling power, and its batteries can be charged in less than one hour. It is expected to reduce CO2 emissions by 210 tons, and NOX emissions by 9 tons a year over a diesel-powered boat.
May 7, 2020

New customs duties for hundreds of product groups
Following additional customs duties introduced on April 21 and May 11, new additional customs duties of up to 30% have been imposed on May 20 on more than 800 product groups, including some equipment used in construction, and certain steel products and automotive spare parts. Berat Albayrak, Turkish Minister of Treasury and Finance, stated that domestic production will be prioritized, and that importation of goods will not be easy anymore, except for products which cannot be produced in Turkey.
May 21, 2020

Tax on FX and gold trading increased
The banking and insurance transactions tax (BSMV) on purchases and sales of foreign exchange has been raised to 1%, up from 0.2%. Purchases and sales of gold will also be subject to this tax. An additional tax revenue of TRY 12 bn per year is expected thanks to this increase. Furthermore, the withholding tax on foreign exchange funds has been increased to 15%.
May 27-June 4, 2020

Turkish Airlines resumes flights
Turkish Airlines (THY) has started resuming its domestic flights gradually as from June 1. International flights, on the other hand, are to be phased in from June 10 onwards, starting with Bahrain, Bulgaria, Greece, Northern Cyprus, and Qatar.
June 6, 2020

Erdoğan announces further normalization steps
Turkish President Recep Tayyip Erdoğan has announced further steps to return to normality regarding the Coronavirus measures. Accordingly, the intercity travel restrictions have been removed for all cities concerned, cafés and restaurants have been permitted to re-open subject to certain conditions, and civil servants have returned to office as from June 1. Moreover, Turkey has opened its borders with Iran and Iraq for international transportation as from June 4. On June 9, Erdoğan proclaimed additional relaxations. Consequently, cafés and restaurants can be open until midnight, theatres, cinemas and wedding halls shall be allowed to re-open as from July 1, people older than 65 years can go out between 10 a.m. and 8 p.m., and the stay-at-home order for under 18-year-olds has been cancelled.
May 29-June 10, 2020

Turkish Central Bank reduces interest rate further
The Central Bank of the Republic of Turkey has reduced its policy rate (one-week repo auction rate) from 8.75% to 8.25%. According to the bank, though the weakening in the economic activity due to the coronavirus pandemic became more pronounced in April, indicators for the first half of May display signs of bottoming-out following the steps taken towards partial normalization. The current account balance is expected to follow a moderate course in 2020 due to the restraining effects of commodity prices and imports. Despite the recent depreciation of the Turkish lira and the increase in food prices, the fall in crude oil and metal prices affects the inflation outlook favourably. Demand-driven disinflationary effects will be more prevalent in the second half of the year.
May 21, 2020

Inflation accelerates
In May 2020, consumer prices in Turkey increased by 1.36% in comparison to the previous month. The CPI went up by 11.39% YOY. The highest monthly rise was registered in clothing & footwear (6.85%), ahead of transportation (3.30%). There was no expenditure group that reported a drop. The biggest annual increase by far was in alcoholic beverages & tobacco (21.41%). The domestic producer price index (D-PPI) increased by 1.54% monthly, and by 5.53% YOY.
June 3, 2020

Automotive hit hardest by Coronavirus
In April, Turkey’s industrial production index decreased by 31.4% YOY, due to the decreasing production levels during the Coronavirus lockdown. The worst-hit sector was the manufacture of motor vehicles (-77.6%), followed by the manufacture of leather (-61.0%), apparel (-60.3%), and textiles (-60.3%). All sub-sectors contracted, except mining of metal ores (+6.0%), and extraction of crude petroleum and natural gas (+2.6%).
June 12, 2020 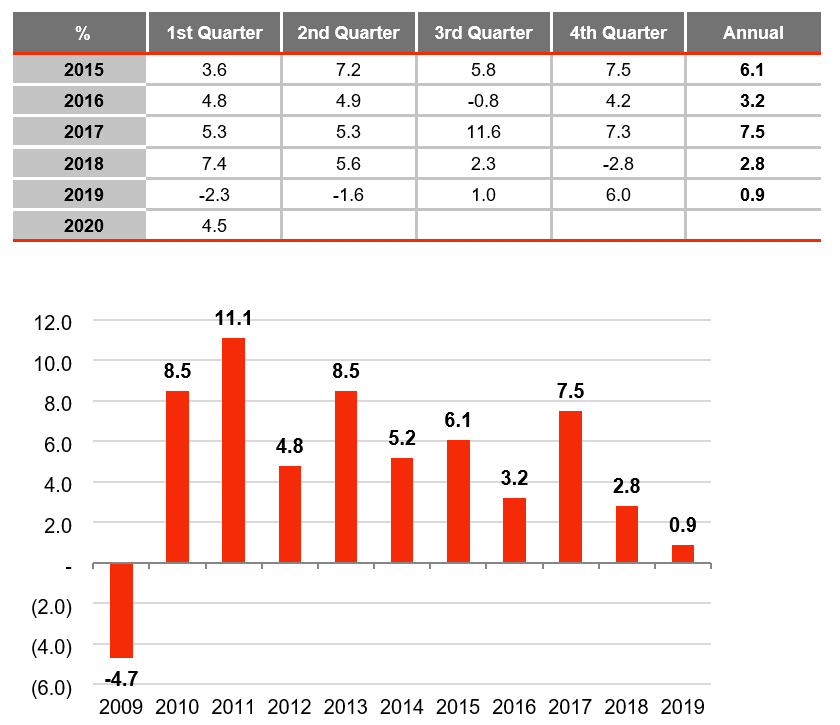 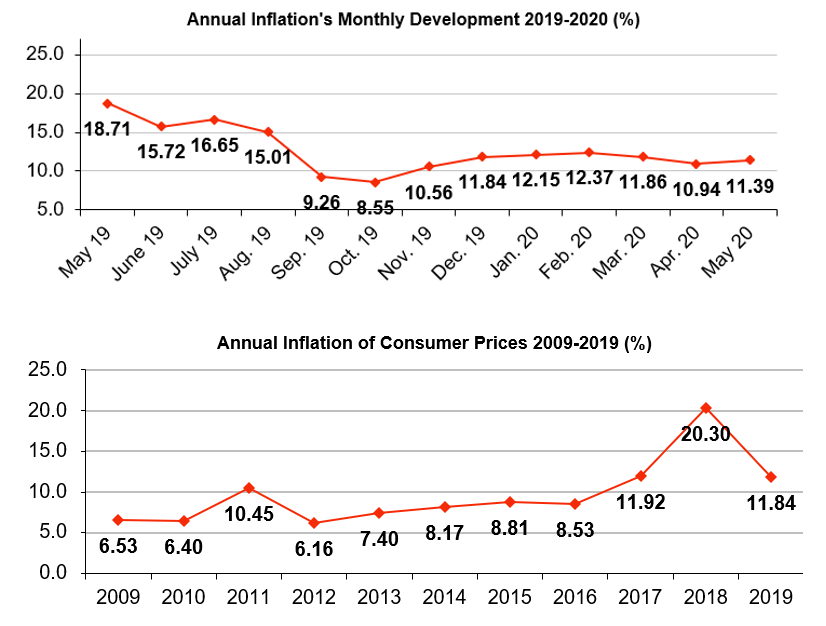