Rize-Artvin Airport commissioned
Turkey’s second and the world’s fifth airport built on a reclaimed land off the coastline has been commissioned in an official ceremony attended by Turkish President Recep Tayyip Erdoğan and Azerbaijan’s President Ilham Aliyev. The airport, which is designed for an annual capacity of 3 million passengers, was built over the course of five years with an investment of TRY 4.4 bn. Consequently, the total number of airports in Turkey has reached 57.
May 14, 2022

Turkish defence industry’s turnover exceeds USD 10 bn
İsmail Demir, the President of the Defence Industry Agency, declared that the turnover of the Turkish defence and aerospace industry exceeded USD 10 bn in 2021, recovering to pre-pandemic levels. The volume of new orders increased by 40%, reaching almost USD 9 bn. R&D expenditures, on the other hand, increased by 32%, exceeding USD 1.6 bn.
May 18, 2022

Wavin to expand its capacity in Turkey
Wavin, a leading supplier of plastic pipe systems headquartered in the Netherlands, is making a machinery investment in its plant in Adana. Following an investment of EUR 6 mn by the end of 2022, the existing annual production capacity of 40,000 tons is expected to increase by 8%. The plant already employs more than 400 people.
May 20, 2022

Ukrainian Ajax to produce in Turkey
Ajax, a Ukrainian producer of security systems, has decided to start production in Istanbul, creating jobs for 400 people. It will be the company’s first plant outside of Ukraine, and is planned to produce 150,000 security system devices per month.
May 23, 2022

Evergreen Line forms entity in Turkey
Taiwanese container transport giant Evergreen Line has established a partnership with its Turkish agent Bosphorus Gemi Acenteliği, forming a new entity in Turkey to carry out its agency activities. As reason for its decision, the company cited the increasing maritime trade potential in Turkey. With its transport capacity of 1.5 mn TEU, Evergreen is the world’s sixth largest shipowner company.
June 3, 2022

German companies complain about exchange rate hike
According to a survey carried out among the members of the German-Turkish Chamber of Trade and Industry (AHK), German companies in Turkey see the deteriorating exchange rate as the biggest obstacle in doing business. The rate of companies expecting business to improve has decreased to 34%, down from 57% in the survey last autumn. On the other hand, the percentage of companies which think that their current business is good has increased from 70 to 73%.
June 7, 2022

Turkey lifts PCR obligation on borders
The obligation to submit a negative PCR test result when entering Turkey has been lifted by a circular of the Turkish Ministry of Interior. As the number of daily Covid-19 cases has decreased below 1,000, the mask mandate in mass transportation has also been lifted.
June 1, 2022

Shehbaz Sharif visits Turkey
President Erdoğan has received Shehbaz Sharif, Pakistan’s new Prime Minister, in Ankara for his first official visit to Turkey. Following their meeting, Erdoğan announced that the two countries are aiming to increase their mutual trade volume to USD 5 bn, up from the current level of USD 1 bn. Seven agreements to enhance cooperation between the ministries and institutions of the brother nations have been signed.
June 1, 2022

Erdoğan receives Maduro
Venezuelan President Nicolás Maduro has visited Ankara at the invitation of President Erdoğan. As a result of the bilateral talks, Turkey and Venezuela entered into several economic cooperation agreements in the areas of tourism, agriculture, and banking. Maduro promised to provide support for Turkish investors from all sectors.
June 9, 2022

Turkish Central Bank keeps interest rate constant
The Central Bank of the Republic of Turkey has kept its policy rate (the one-week repo auction rate) constant at 14.00%. The bank again stated that it “expects the disinflation process to start on the back of strengthened measures for sustainable price and financial stability along with the decline in inflation owing to the base effect and the resolution of the ongoing regional conflict.”
May 26, 2022

Inflation continues to rise
In May 2022, consumer prices in Turkey increased by 2.98% in comparison to the previous month, and the CPI went up by 73.5% YOY. The highest monthly increment took place in alcoholic beverages and tobacco (6.53%), followed by recreation and culture (6.15%). No decrease occurred among the main product groups. The biggest annual price increase was in transportation (107.62%). The domestic producer price index (D-PPI) rose by 8.76% monthly, and by 132.16% YOY.
June 3, 2022

Industrial production increases further
In April, Turkey’s industrial production index went up by 10.8% YOY, with the manufacturing industry recording an increment of 11.9%. The highest increases in the manufacturing industry category occurred in the product groups “wearing apparel” (43.9%), “leather and related products” (40.0%), and “other transport equipment” (36.2%). No decreases were reported in the main product groups.
June 13, 2022 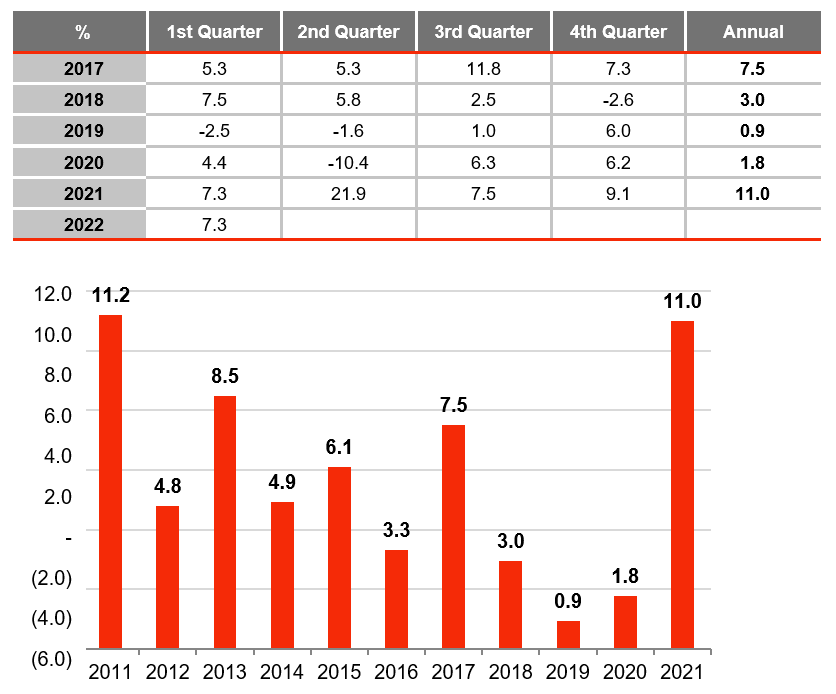 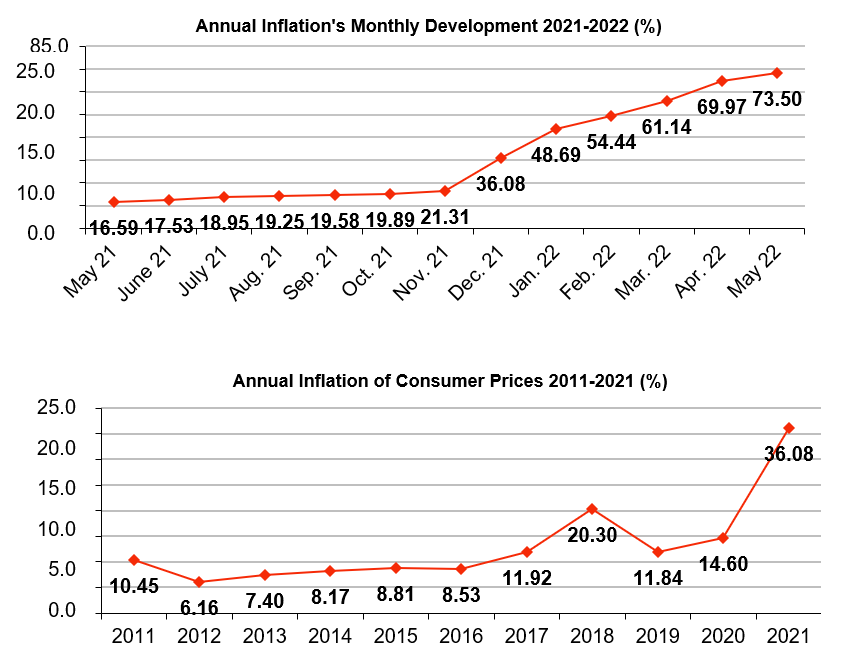