Regulation on recycling contribution amended
The Turkish Revenue Administration has made an amendment to the regulation for the recycling contribution fee payable by manufacturers and importers of environmentally harmful products. In the revised form of the regulation, in addition to plastic bags, also tyres, batteries, lubricants, vegetable oils, electrical and electronic goods, pharmaceuticals, and packaging materials are now subject to a contribution fee for recycling, based on weight, number, or boxes.
Feb. 5, 2020

Palsgaard acquires Teknaroma
Danish company Palsgaard, a leading manufacturer of food emulsifiers, has acquired 90% of its Turkish business partner Teknaroma’s shares. Teknaroma has been active in the food ingredients sector as an agent and distributor since 1986.
Feb. 12, 2020

AtlasGlobal files for bankruptcy
Turkish airline operator AtlasGlobal has filed for bankruptcy and terminated its flight operations after almost 20 years. The company had run into financial difficulties due to the exchange rate hike since 2018 and the increasing costs involved with relocation to the new Istanbul Airport. Before facing these difficulties, the company offered flights to more than 50 destinations in 35 countries.
Feb. 15, 2020

Turkey exempts citizens of six European countries from visa
The Turkish Ministry of Foreign Affairs has announced that citizens of Austria, Belgium, the Netherlands, Spain, Poland, and the UK have become exempt from visa up to 90 days within 180 days, from March 2nd, 2020 on. The purpose of the exemption was given as increasing the tourism potential and furthering commercial, economic, and cultural relations.
Feb. 20, 2020

Agreement signed in Moscow after Turkish soldiers were killed in Syria
On February 27th, 33 Turkish soldiers were killed in an air strike by regime forces in Idlib, Syria. Turkish President Recep Tayyip Erdoğan went to Moscow on March 5th to meet the Russian President Vladimir Putin. According to Putin, the Syrian army did not know that Turkish soldiers were at that point during the attack. With the agreement signed in Moscow, a ceasefire in Idlib has come into force, a safety corridor shall be established, and joint patrols of Turkish and Russian forces in the region shall start.
Feb. 28 – Mar. 6, 2020

Turkey and the EU continue to negotiate on the refugee issue
Numerous refugees from Syria and other Middle Eastern countries continue their attempts to cross into Greece, which started after Turkey had unilaterally opened its borders. President Erdoğan met Ursula von der Leyen, the President of the European Commission, and Charles Michel, President of the European Council, in Brussels on March 9th. Following the meeting, von der Leyen stated that “Migrants need support, Greece needs support, but also Turkey needs support. And this involves finding a path forward with Turkey.”
Mar. 10, 2020

Turkey reports first fatality due to coronavirus
The Turkish Ministry of Health has announced that an 89-year-old man has died due to coronavirus. There were 98 officially announced coronavirus cases in Turkey as of March 17th; and the Turkish government has proclaimed several measures to prevent an epidemic. Turkey had already halted flights to and from China, S. Korea, Iran, Iraq, and Italy, as well as temporarily closing its borders with Iran and Iraq before the first case was reported in the country. Following the first case, all flights from Germany, France, Spain, Austria, the Netherlands, Belgium, Sweden, Norway, Denmark, the UK, Switzerland, S. Arabia, Egypt, Ireland, the UAE, Azerbaijan, and Georgia have also been halted until April 17th. Turkish citizens returning to Turkey from those countries, as well as from the Umrah in Saudi Arabia, have been placed in quarantine for 14 days. Schools and universities are temporarily closed, and football matches shall be played without spectators. Except for shopping malls and restaurants, all public venues, including cinemas and gyms, have been closed until further notice.
Mar. 17, 2020

Turkish economy grew by 0.9% in 2019
In the fourth quarter of 2019, Turkey’s GDP grew by as high as 6.0% compared with the same period of the previous year. Accordingly, the annual GDP in 2019 was announced as USD 753.7 bn, and the annual growth as 0.9%. This was the weakest growth performance of the Turkish economy since the contraction in 2009. The highest contribution to growth in 2019 was by net exports with 2.3 points, followed by consumption with 1.1 points, whereas the contribution of investment was negative with -3.6%. According to the production approach, the services sector had the highest contribution with 1.3 points, whereas the industrial sector was stagnant, and agriculture only grew by 0.2%. The contribution of the construction sector, on the other hand, was negative with -0.6%. The GDP per capita at current prices dropped to USD 9,127.
Feb. 28, 2020

Inflation continues to accelerate
In February 2020, consumer prices in Turkey increased by 0.35% in comparison to the previous month. The CPI went up by 12.37% over the same month of the previous year (YOY). The highest monthly increase was registered in food & non-alcoholic beverages (2.33%), ahead of health (2.03%). The highest monthly decrease took place in clothing & footwear (-4.83%). The biggest annual increase by far was in alcoholic beverages & tobacco (40.15%). The domestic producer price index (D-PPI) increased by 0.48% monthly, and by 9.26% YOY.
Mar. 3, 2020

Turkish Central Bank reduces interest rate further
The Central Bank of the Republic of Turkey has reduced its policy rate (one-week repo auction rate) from 10.75% to 9.75%. According to the bank, the sharp fall in commodity prices, especially for crude oil and metal, is affecting the inflation outlook favourably, and due to the weakening in global trade and measures such as travel restrictions, the disinflationary effect of aggregate demand conditions has increased. Hence, the downside risks on inflation have increased. The bank has also announced several measures to support the banking system due to the coronavirus pandemic, which include providing banks with as much liquidity as they need.
Mar. 17, 2020 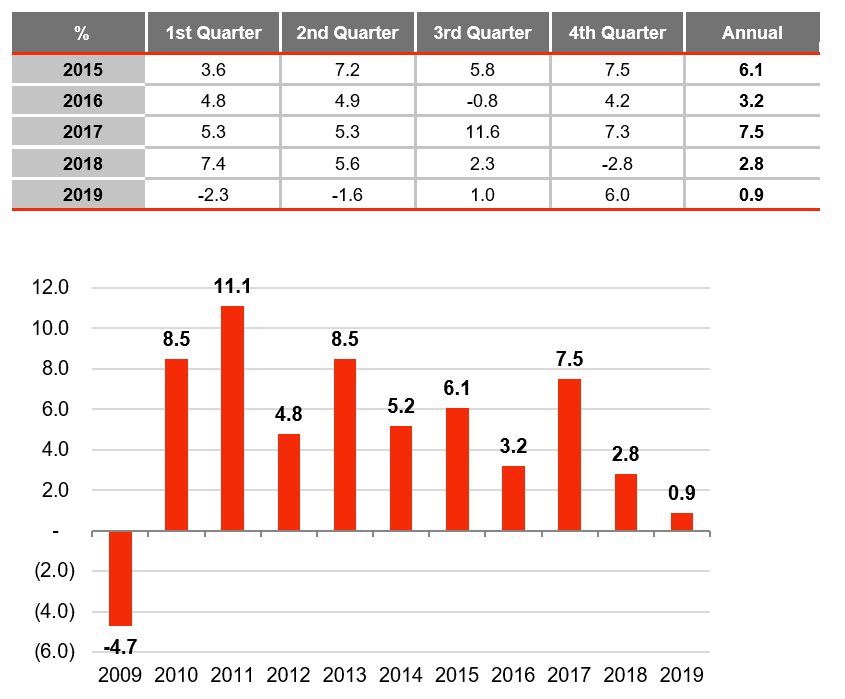 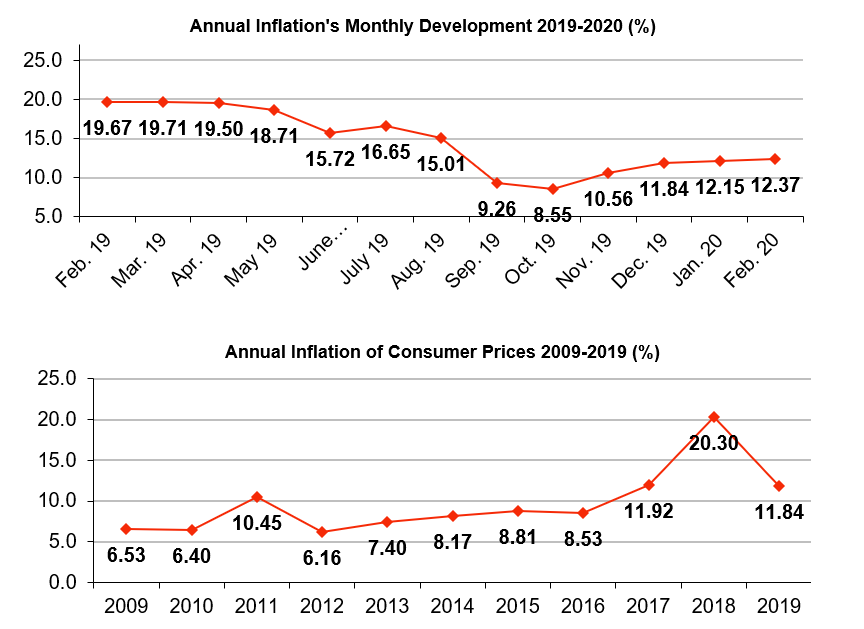