Koç Holding, Ford and SK On intend to build battery plant
Turkish conglomerate Koç Holding, the Ford Motor Company, and South Korean SK On Co., have signed a memorandum of understanding to evaluate the cooperation possibilities for building a plant to produce electrical vehicle batteries in Ankara. In case of an agreement, the plant is planned to be commissioned in 2025 with a 30-45 GWh capacity.
Mar. 15, 2022

Hyosung invests USD 500 mn for a new plant
South Korean Hyosung Corporation has decided to build its second plant in Tekirdağ province with an investment of USD 500 mn to produce elastic yarn and polyester. The company had made its first investment in 2007, with an amount of USD 350 mn. The construction of the new plant is planned to start in January 2023, and manufacturing is also set to begin in the same year.
Mar. 16, 2022

Çanakkale Bridge commissioned
The 1915 Çanakkale Bridge has been commissioned by Turkish President Recep Tayyip Erdoğan and the Prime Minister of the Republic of Korea, Kim Boo-kyum, following a construction period of 5 years and a EUR 3.1 bn investment. The 4.6 km long bridge cuts the travelling time between the two sides of the Dardanelles Strait to 6 minutes.
Mar. 18, 2022

Opposition parties sign declaration
The leaders of six opposition parties in Turkey, including the main opposition party CHP (Republican People’s Party), have signed a joint declaration to pledge a return to parliamentary democracy. In July 2018, Turkey’s political system had been transformed into a presidential model, granting extensive powers to the president.
Feb. 28, 2022

Turkey relaxes pandemic measures
The Turkish Minister of Health, Fahrettin Koca, has announced new decisions regarding the coronavirus measures. Accordingly, the obligation to wear masks in open areas has been lifted. Also, sharing the so-called HES code, which indicates a person’s COVID-19 risk status, will no longer be required. Furthermore, persons without symptoms will not be asked to submit a negative test result.
Mar. 2, 2022

Presidents of Turkey and Israel meet
President Erdoğan has received his Israeli counterpart Isaac Herzog in Ankara for the highest-level meeting between Turkey and Israel since 2007. Erdoğan stated that he believes the trade volume between the two countries will reach USD 10 bn in 2022, and they are ready to cooperate in energy as well as energy security projects.
Mar. 9, 2022

Russian and Ukrainian Foreign Ministers meet in Antalya
Sergey Lavrov, Foreign Minister of Russia, and Dmytro Kuleba, Minister of Foreign Affairs of Ukraine, have met in Antalya, hosted by Mevlüt Çavuşoğlu, Turkish Minister of Foreign Affairs. While no ceasefire could be agreed upon in the negotiations, the way for diplomacy has been left open. President Erdoğan called again for an end to hostilities, pointing out that Turkey will use its rights based on the Montreux Convention, which regulates the passage of warships through the Turkish Bosporus and Dardanelles Straits as well as the Sea of Marmara.
Mar. 11, 2022

Inflation continues to increase
In February 2022, consumer prices in Turkey increased by 4.81% in comparison to the previous month, and the CPI went up by 54.44% YOY. The highest monthly increment was registered in food and non-alcoholic beverages (8.41%), followed by furnishings and household equipment (7.00%). No decrease occurred among the main product groups. The biggest annual price increase was in transportation (75.75%). The domestic producer price index (D-PPI) rose by 7.22% monthly, and by 105.01% YOY.
Mar. 3, 2022

FDI increase of 74.2% in 2021
The volume of foreign direct investments (FDI) in Turkey has increased by as high as 74.2% in 2021 to USD 13.6 bn. With USD 3.3 bn, the wholesale and retail trade was the main sector attracting FDI, followed by the manufacturing industry with USD 1.8 bn. With USD 412 mn, the manufacturing of transport equipment was the main sub-sector in the manufacturing industry, followed by the production of chemicals and pharmaceuticals with USD 292 mn. As a region, Europe was the biggest source of FDI, with the leading countries being the UK, the USA, the Netherlands, Switzerland, and the UAE.
Mar. 11, 2022

Industrial production keeps gaining
Turkey’s industrial production index in January went up by 7.6% YOY, with the manufacturing industry recording an increment of 7.7%. The highest increases in the manufacturing industry category occurred in the product groups “other transport equipment” (64.6%), “printing and reproduction of recorded media” (49.1%), and “leather and related products” (48.3%). The decreases were reported in “basic pharmaceutical products and pharmaceutical preparations” (-15.7%), “electrical equipment” (-3.1%), and “fabricated metal products” (-1.4%).
Mar. 11, 2022

Turkish Central Bank keeps interest rate constant
The Central Bank of the Republic of Turkey has kept its policy rate (the one-week repo auction rate) constant at 14.00%. The bank stated that it “expects disinflation process to start on the back of measures taken and decisively pursued for sustainable price and financial stability along with the decline in inflation owing to the base effect and the resolution of the ongoing regional conflict.”
Mar. 17, 2022 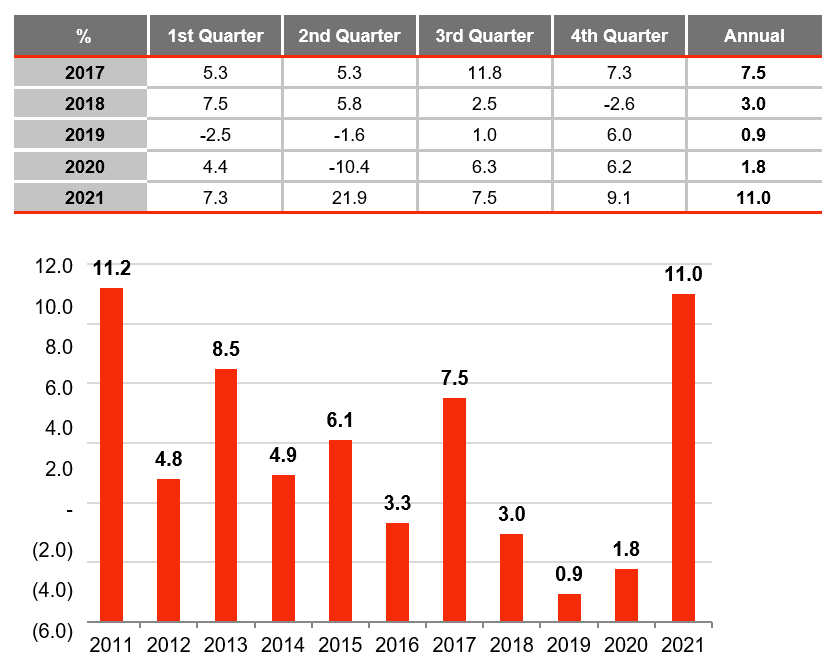 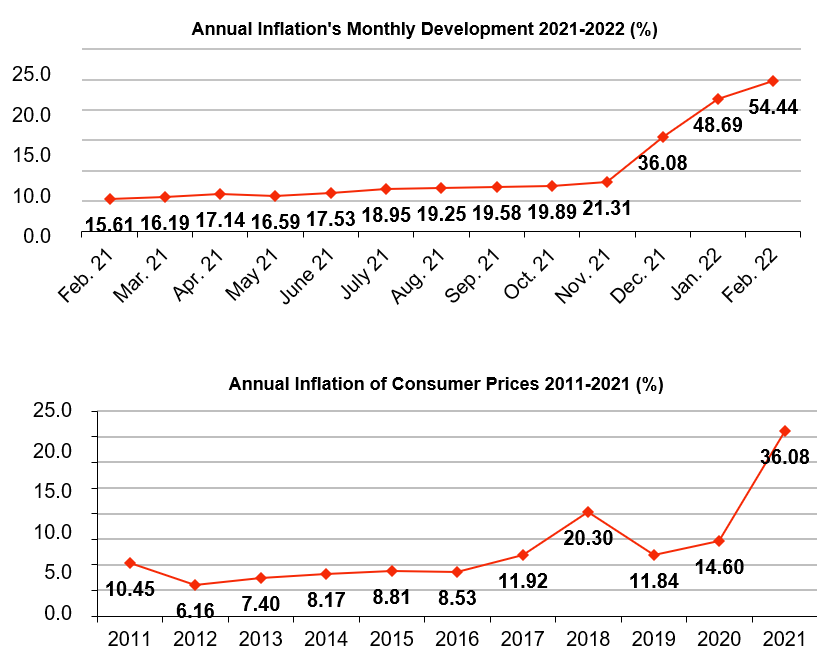