Eibach enters Turkish market
German company Eibach, a leading manufacturer of suspension and chassis systems for vehicles, has entered the Turkish market through a distributorship agreement with Turkish Birlas Group. According to its chairman Wilfried Eibach, their aim is to position themselves, together with Birlas Group, as supplier of the automotive industry in Turkey, starting with the aftermarket.
Oct. 20, 2022

Trendyol and Fawaz to supply Turkish goods to Saudi market
Turkish e-commerce giant Trendyol and Saudi Arabia-headquartered retail company Fawaz Alhokair Group have signed a cooperation agreement in the presence of both countries’ finance ministers. Accordingly, Trendyol will present Turkish-manufactured products to the Saudi market, and cooperate with Fawaz for growth opportunities including physical stores.
Oct. 28, 2022

Mass production of TOGG begins
An official ceremony in Gemlik, Bursa province, attended by Turkish President Erdoğan marked the start of the mass production of TOGG, dubbed the “national and indigenous automobile” of Turkey. While the electric SUV is planned to come onto the market by the end of the first quarter of 2023, its selling price has not been announced yet. 175,000 vehicles are expected to be produced annually once the plant has reached its full capacity.
Oct. 29, 2022

Hugo Boss commissions fourth plant in Izmir
German ready-wear producer Hugo Boss has opened its fourth production facility in Izmir, following an investment of EUR 4.5 mn. With additional capacity expansions in 2023, the number of employees is expected to increase to 5,700. Established in 1999, Hugo Boss’ Turkey plant accounts for 45% of the brand’s global production.
Nov. 1, 2022

Talesun and Mem Group to cooperate for solar panel production
Talesun Solar, owned by Chinese Zhongli Group, and Turkish Mem Group have signed a cooperation agreement to produce PV solar panels. The plant with an annual production capacity of 1 GW is to be built in the city of Kahramanmaraş, where Mem Group is based. Production is scheduled to begin in the second quarter of 2023.
Nov. 4, 2022

Bomb attack in Istanbul kills six people
At least six people have been killed and 81 wounded in an explosion in Istiklal Street, one of the busiest touristic areas in Istanbul. Süleyman Soylu, the Minister of Interior, stated that the person who left the bomb had been arrested and accused the PKK (Kurdistan Workers’ Party) of responsibility.
Nov. 14, 2022

Turkish Central Bank further reduces interest rate
The Central Bank of the Republic of Turkey has reduced its policy rate (the one-week repo auction rate) from 12.00% to 10.50%. The bank stated that “It is critically important that financial conditions remain supportive to preserve the growth momentum in industrial production and the positive trend in employment in a period of increasing uncertainties regarding global growth as well as further escalation of geopolitical risks.”
Oct. 20, 2022

Inflation keeps rising
In October 2022, consumer prices in Turkey increased by 3.54% over the previous month, and the CPI went up by 85.51% YOY. The highest monthly increase took place in clothing and footwear (8.34%), followed by food and non-alcoholic beverages (5.09%). No decrease occurred among the main product groups. The biggest annual price increment was in transportation (117.15%). The domestic producer price index (D-PPI) rose by 7.83% monthly, and by a full 157.69% YOY.
Nov. 3, 2022

Non-seasonally adjusted unemployment remains in single digits
In September 2022, some 3,444,000 people in Turkey aged 15 and older were officially out of work. The non-seasonally adjusted unemployment rate of 9.9% was 0.1 points higher than in the previous month but amounted to a decrease of 1.2 points YOY. The labour force participation rate increased to 53.7% in total, and to 35.9% for females.
Nov. 10, 2022

Industrial production continues to slow down
In September, Turkey’s industrial production index was only able to increase by 0.4% YOY, with the manufacturing industry recording an increment of 1.7%. The highest increases in the manufacturing industry category occurred in the product groups “leather and related products” (40.4%), “printing and reproduction of recorded media” (35.6%), and “motor vehicles, trailers and semi-trailers” (22.9%). The highest decreases were reported in the product groups “basic metals” (-13.0%), “other transport equipment” (-11.6%), and “textiles” (-10.5%).
Nov. 11, 2022 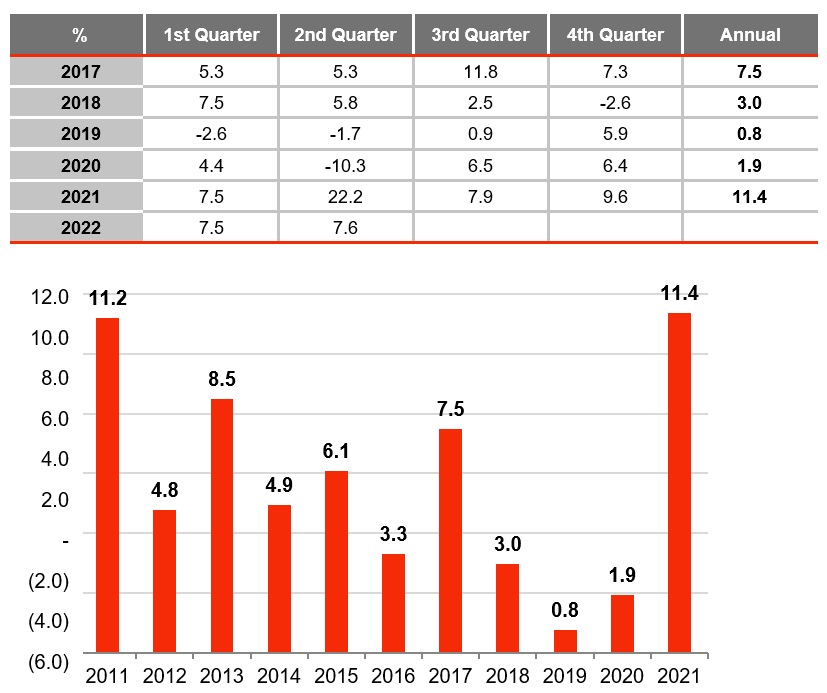 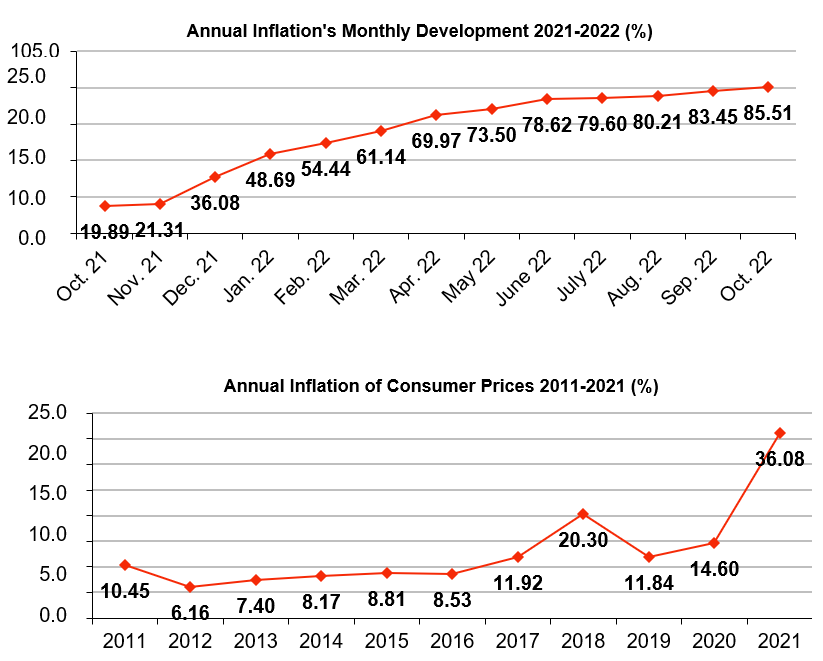