Umdasch acquires majority of Madosan
Austrian formwork and store-building company Umdasch Group intends to acquire 55% shares of the Turkish shelf systems producer Madosan, located in Bursa. Madosan has 125 employees and exports 65% of its production to 74 countries. Silvio Kirchmair, CEO of Umdasch The Store Makers, stated that this acquisition will provide their company with an extraordinary competitive production base.
Sep. 2, 2020

Erdoğan inaugurates new highway
The Turkish President Recep Tayyip Erdoğan has opened a new highway between the capital Ankara and the Cappadocian city of Niğde. The 275 km long section (330 km including access roads) will cut the travelling time between the two cities from over 4 down to under 2.5 hours.
Sep. 5, 2020

Limitation on dividend distribution extended
Pursuant to a presidential decree published on Sep. 18, the duration of the requirement for stock corporations to distribute dividends only up to 25% of their net profit for the year 2019 has been extended for three months until the end of 2020. This is part of the Turkish government’s package of measures to counteract the economic impact of the coronavirus pandemic.
Sep. 20, 2020

Tax on FX and gold trading cut
The banking and insurance transactions tax (BSMV) on purchases and sales of foreign exchange and gold has been decreased to 0.2%, down from 1%. Furthermore, the withholding tax on deposit accounts with longer than one-year maturity has been reduced to 0%, up to 1 year maturity to 3%, and up to 6 months maturity to 5%.
Oct. 1, 2020

Saudi Arabian business leader calls for boycott of Turkish products
Ajlan al-Ajlan, the head of Saudi Arabia’s Chambers of Commerce, has called for a boycott of Turkish exports, investment and tourism, due to the “hostility of the Turkish government” against S. Arabia. The relations between the two countries had recently deteriorated due to conflicts over policies in the Middle East and the murder of journalist Jamal Khashoggi. The volume of Turkey’s exports to Saudi Arabia was USD 3.3 bn in 2019, making this country Turkey’s 16th largest export destination.
Oct. 4, 2020

Turkey declares its full support of Azerbaijan
The Turkish Ministry of Foreign Affairs has condemned the attacks by Armenia on civilian settlements in Azerbaijan. The statement issued reaffirmed Turkey’s support for the stance of the Azerbaijani government to exercise its right of self-defence arising from international law. Meanwhile Canada has frozen its exports of unmanned air vehicle systems to Turkey until it is proven that Canadian military technology is not being used in the armed conflict between Armenia and Azerbaijan.
Oct. 4-6, 2020

EU issues 2020 Report on Turkey
According to the annual report presented by the European Commission, concerns remained over the lack of independence of the Turkish judiciary, and the deterioration of the human rights situation continued. Tensions with the EU increased when Turkey’ government encouraged refugees to take the land route to Europe and when natural gas exploration in the Eastern Mediterranean began. The economic recovery after the currency depreciation in 2018 remained fragile, given the weak labour market and the need to repair corporate balance sheets.
Oct. 7, 2020

Erdoğan sponsors re-opening of Cypriot resort ghost town
Ahead of presidential elections in the Turkish Republic of Northern Cyprus (TRNC), the government has partially opened the beach of Maraş (formerly Varosha) to the public. This former touristic town had been abandoned by its inhabitants during Turkey’s military intervention in Cyprus in 1974 and since been off limits. Turkish President Erdoğan supported the move, claiming that the town belongs to the territory of the TRNC, whereas Stéphane Dujarric, the spokesperson of UN Secretary‑General António Guterres, stated any unilateral actions that could trigger tensions on the island should be avoided.
Oct. 8, 2020

Moody’s lowers Turkey’s rating
The credit rating agency Moody’s has lowered Turkey’s credit rating to the non-investment grade B2 while keeping the country’s outlook at negative. The agency emphasized increasing external vulnerabilities, the questionable ability of institutions to address the challenges as the risks to the country’s credit profile increase, and an erosion of fiscal buffers.
Sep. 12, 2020

Turkish Central Bank increases interest rate
The Central Bank of the Republic of Turkey has increased its policy rate (one-week repo auction rate) from 8.25% to 10.25%. According to the bank, the economic activity has been recovering in the third quarter, and a normalization trend in consumer loans has started. As a result of the fast economic recovery with a strong credit momentum, as well as the developments in the financial market, inflation has followed a higher-than-envisaged path. Hence, the bank has decided to take a tightening step in order to contain risks to the inflation outlook.
Sep. 24, 2020

New Economy Programme announced
Berat Albayrak, the Minister of Treasury and Finance, has presented the government’s new economy programme covering the next three years. Accordingly, Turkey’s economy is expected to grow by 0.3% in 2020, by 5.8% in 2021, and by 5.0% in the following two years. The unemployment rate target for 2023 has been set at 10.9%, and the inflation rate target at 4.9%.
Sep. 30, 2020 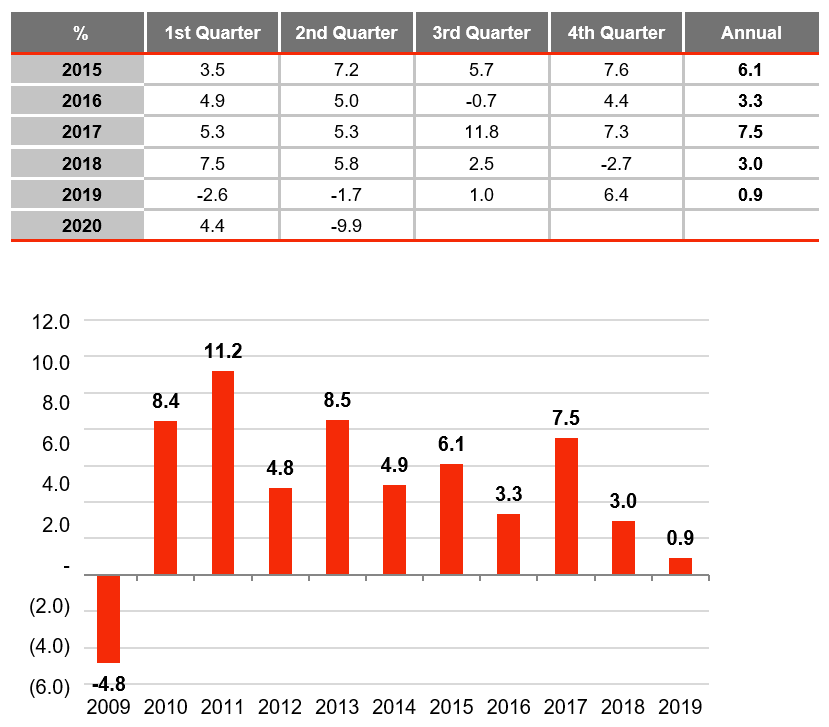 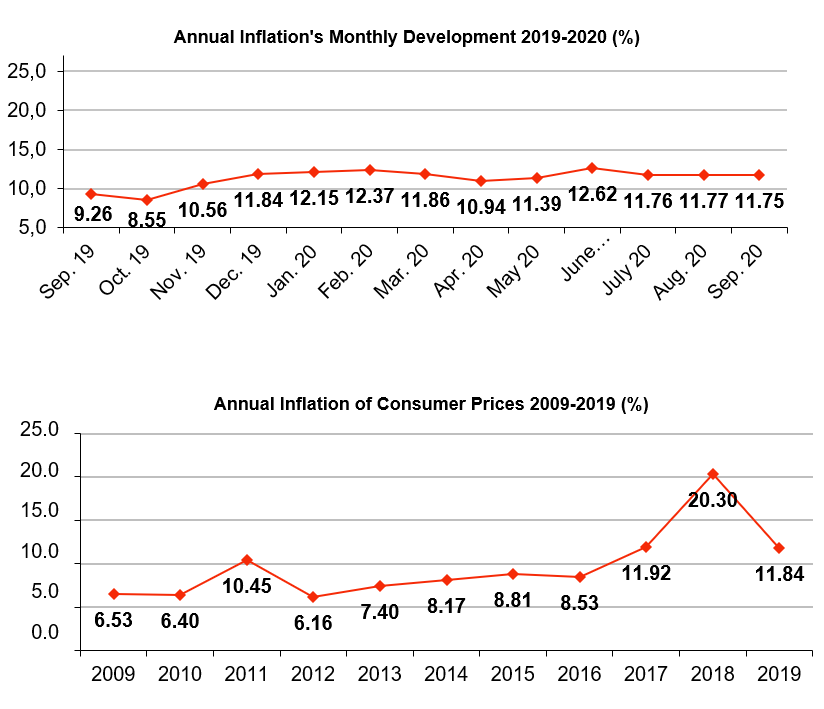