Prometeon opens its largest R&D centre in Turkey
Prometeon, a global leader in industrial tyre manufacturing, has opened a new R&D centre, the company’s largest, in Kocaeli, Turkey. Roberto Righi, Deputy General Manager of Prometeon Tyre Group, stating that Turkey is the management hub of a region covering 75 countries, said they plan to invest USD 40 mn in the country by 2023, USD 15 mn of which have been earmarked for the R&D centre.
Sep. 13, 2021

Habaş acquires Honda’s plant
Turkish industry giant Habaş has acquired Honda’s facility in Gebze (Kocaeli province), where production was ceased in September. Habaş plans to produce hybrid passenger cars in this plant employing former Honda employees. Company executives stated that they have also purchased Honda’s UK plant equipment, which shall be transported to Gebze. After having manufactured cars in Turkey for 24 years, Honda had announced the closure in 2019.
Oct. 1, 2021

Turkish airline executive to become IATA chairman
Mehmet T. Nane, CEO of Pegasus Airlines, has been named chair of the Board of Governors of the International Air Transport Association (IATA). Nane will embark on his one-year term following the conclusion of IATA’s 78th Annual General Meeting in Shanghai in June 2022. He is the first Turkish national appointed to this position so far.
Oct. 7, 2021

PMI to acquire Sabancı’s shares in joint ventures
Tobacco giant Philip Morris International (PMI) has applied to the Turkish Competition Authority to acquire Turkish Sabancı Holding’s shares of 25% in their partnerships PHILSA and PMSA. The share transfer price has been quoted as TRY 2.9 bn. The partnerships were established in 1991 and 1994, respectively.
Oct. 7, 2021

Erdoğan addresses UN General Assembly
Turkish President Recep Tayyip Erdoğan has attended the 76th General Assembly of the United Nations in New York. In his speech before the assembly, he announced that Turkey will ratify the Paris Agreement. Meeting with representatives of U.S. companies, Erdoğan stated that the trade volume between the two countries is expected to reach USD 25 bn by the end of this year, and that Turkey’s flexible and high production capacity provides many opportunities for American companies in terms of supply chain and security of supply.
Sep. 23, 2021

Turkish Parliament votes to ratify Paris climate accord
The Turkish Parliament has passed a law for the ratification of the Paris Agreement, which aims to reduce greenhouse gas emissions at a global level. More than 190 countries have already formally signed the agreement or acceded to it.
Oct. 6, 2021

Turkish Central Bank reduces interest rate
The Central Bank of the Republic of Turkey has reduced its policy rate (the one-week repo auction rate) to 18.00%, down from 19.00%. The bank stated that a revision in monetary policy stance had been required after having evaluated “the analyses to decompose the impact of demand factors that monetary policy can have an effect on, core inflation developments, and supply shocks”.
Sep. 23, 2021

Inflation continues to increase
In September 2021, consumer prices in Turkey rose by 1.25% in comparison to the previous month, with the CPI going up by 19.58% YOY. The highest monthly rise was registered in education (5.15%), followed by furnishings & household equipment (3.33%). The only decrease among the main product groups occurred in clothing & footwear (-0.16%). The biggest annual price increase was in food & non-alcoholic beverages (28.79%). The domestic producer price index (D-PPI) rose by 1.55% monthly, and by 43.96% YOY.
Oct. 4, 2021

Industrial production gains 13.8%
Turkey’s industrial production index in August went up by 13.8% YOY, with the manufacturing industry recording an increment of 14.2%. The highest increases in the manufacturing industry category took place in the product groups “motor vehicles, trailers and semi-trailers” (26.3%), “other transport equipment” (26.3%), and “machinery and equipment n.e.c.” (24.3%). The only decreases were reported in “basic pharmaceutical products and pharmaceutical preparations” (-5.7%), and “tobacco products” (-5.3%).
Oct. 12, 2021 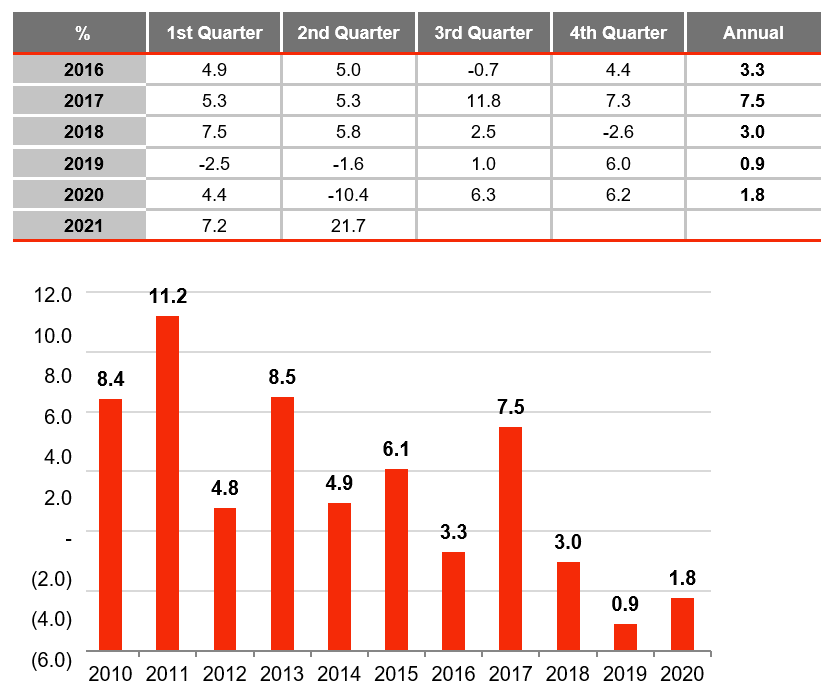 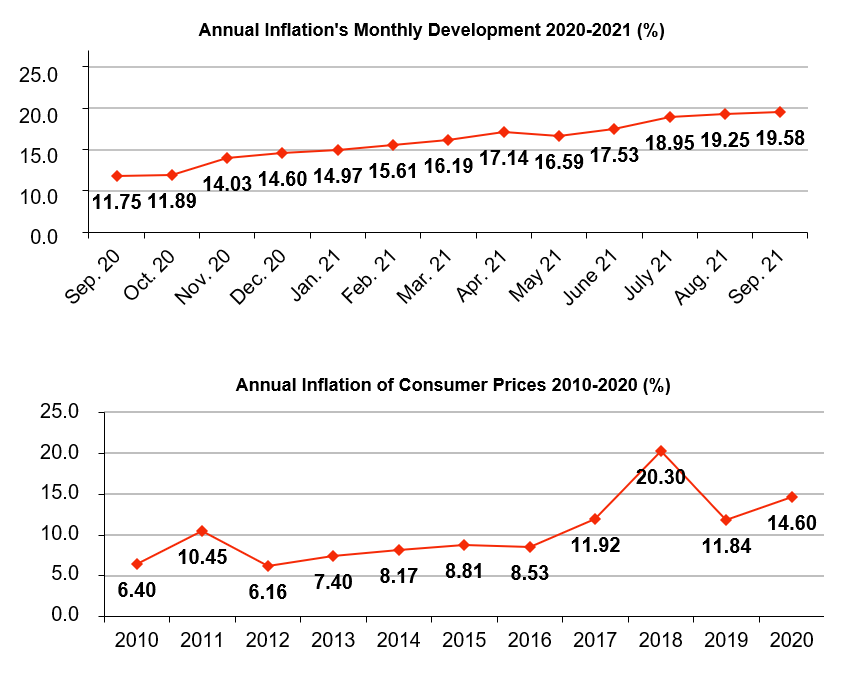