EGYPT – Plug and Play opens new office in Egypt
American startup incubator Plug and Play has launched a new office in Cairo in partnership with the Egyptian Information Technology Industry Development Agency (ITIDA) to boost Egypt’s entrepreneurship and startup ecosystem. The office will host high-potential Egyptian startups and provide them with financial and technical support. The agreement between Plug and Play and ITIDA seeks to accelerate 60 growth-stage startups and incubate 60 early-stage startups, as well as attract USD 20 mn of investments and create 500 job opportunities.
Sep. 23, 2021

MOROCCO – Stellantis to increase local sourcing for Moroccan factory to EUR 3 bn by 2025
Multinational automobile manufacturer Stellantis has signed an amendment to the industrial partnership agreement it had signed with Morocco’s Ministry of Industry in 2015. According to the amendment, Stellantis is engaged to increase the value of local sourcing for its factory in Morocco to EUR 2.5 bn by 2023 and EUR 3.0 bn by 2025. Stellantis is also engaged to create 3,000 jobs for Moroccan engineers and technicians by 2025, adding up to the 2,500 local employees already working at the Kenitra factory, near Rabat.
Sep. 2, 2021

MOROCCO – Morocco’s OCP Group to build USD 2.4 bn fertilizer plant in Ethiopia
Morocco’s phosphate company, OCP Group, has signed an agreement with the Ethiopian government to build a fertilizer plant in eastern Ethiopia. The project has an estimated initial budget of USD 2.4 bn and the plant is expected to produce 2.5 million tonnes of fertilizers per year by the end of 2022. The agreement also provides for an expansion of the plant to produce 3.8 million tonnes per year by 2025, increasing the total investment budget to USD 3.7 bn.
Sep. 18, 2021

TUNISIA – American tire manufacturer Firestone opens its first store in Tunisia
The US-based Firestone Tire and Rubber Company has opened its first store and service station in Tunisia. The store is located at the Barki gas station in Tunis, operated by TotalEnergies. The opening is part of a partnership between the Tunisian branch of TotalEnergies and Firestone, according to which the American company will open stores and service stations in six different locations across the country.
Sep. 12, 2021

ALGERIA – Algeria exempts employers from penalties on late social security payments
The Algerian government has extended the exemption of employers from late payment penalties on social security contributions until January 31, 2022. The decision seeks to reduce the expenses of companies as the Algerian economy is still recovering from the COVID-19 crisis. According to the Ministry of Labor, the exemption will concern more than 760,000 employers.
Sep. 15, 2021

EGYPT – Egypt allows businesses to remain open for longer during winter
The Egyptian government has decided to implement the winter closure timing for businesses, starting October 1. The new closing time for shops is set at 11 p.m. on Thursdays and Fridays and 10 p.m. on the rest of the week. Meanwhile, the opening time is set at 7 a.m. As for restaurants and coffee shops, the opening time is set at 5 a.m., while the closing time is set at midnight, with the possibility of an hour extension on official holidays. Finally, workshops and craft shops located in residential areas can open at 8 a.m. and must close at 6 p.m., except for workshops located on roads and gas stations. The new closing hours are not applicable for supermarkets, pharmacies, bakeries, and grocery stores.
Oct. 1, 2021

MOROCCO – National Rally of Independents wins 2021 Moroccan legislative elections
The National Rally of Independents (RNI), a liberal political party, has won the 2021 Moroccan legislative elections, earning 102 out of 395 seats at the House of Representatives, the lower house of the Moroccan Parliament. The Party of Authenticity and Modernity (PAM) came second, with 86 seats, followed by the Party of Independence (PI), with 81 seats. The Islamic Party of Justice and Development (PJD), the ruling party in Morocco between 2011 and 2021, came in the eighth position, with only 13 seats.
Sep. 9, 2021

MOROCCO – Morocco’s new Head of Government announces three-party coalition
The RNI President, Moroccan billionaire Aziz Akhannouch, has announced that the new government coalition in Morocco will include the three leading parties from the legislative elections: RNI, PAM, and PI. Aziz Akhannouch was nominated by King Mohammed VI on September 10 as Morocco’s new Head of Government after his party won the legislative elections.
Sep. 22, 2021

MOROCCO – Moroccan government alleviates COVID-19 restrictions
The Moroccan government has alleviated a series of COVID-19 restrictions following the improvement of the epidemiological situation in the country. The starting time of the nationwide night curfew was moved from 9 p.m. to 11 p.m. The closing time for shops, restaurants, and coffee shops was also pushed to 11 p.m. instead of 9 p.m. Finally, public bathhouses and gyms can now reopen to the public, on the condition of not exceeding 50% of their maximum capacity. The alleviated measures have all went into effect on October 1.
Oct. 1, 2021

ALGERIA – Algeria seeks to vaccinate 70% of the population against COVID-19 by end of 2021
Algeria’s Ministry of Health has announced that the country’s national vaccination campaign against COVID-19 will be maintained until the end of 2021, to vaccinate 70% of the Algerian population. The vaccination campaign was initially launched in July, but it was only accelerated at the beginning of September with the opening of dozens of new vaccination centers across the country. Algerian health authorities seek to vaccinate at least one million citizens every week until the end of the year.
Sep. 11, 2021

ALGERIA – Algerian government reduces COVID-19 restrictions
The Algerian government has allowed the reopening of used cars markets, gyms, youth centers, cultural centers, and libraries in all Algerian governorates, starting September 13. The facilities, however, must not exceed 50% of their hosting capacity. Algerian authorities announced that the restrictions could still be reimplemented, depending on the evolution of the epidemiological situation across regions.
Sep. 12, 2021

ALGERIA – Algeria closes its airspace on Moroccan aircraft
Algeria has decided to close its airspace on all Moroccan aircraft, starting September 22. According to the Algerian President, Abdelmadjid Tebboune, the decision is due to “the continuous provocations and hostile practices from Morocco.” The decision came nearly one month after Algeria decided to cut its diplomatic ties with its western neighbor. The closure of the Algerian airspace on Moroccan aircraft has forced planes operated by Royal Air Maroc to adjust their routes that used to go over Algeria, slightly increasing their durations.
Sep. 22, 2021

TUNISIA – Tunisian exports record 7.3% monthly growth in August
Tunisian exports have increased by 7.3% between July and August 2021, while imports have only witnessed a slight 0.2% increase. The figures allowed Tunisia’s foreign trade coverage ratio to increase by 5.2% and stand at 79.7%. The increase in exports is mainly due to the growth of mechanical and electrical industries exportations (+15.1%), and textile, clothing, and leather (+7.7%). Meanwhile, the slight change in imports was driven by a 101.6% increase in the purchases of energy products, counterbalanced by a 44.7% decline in the volume of imported food products.
Sep. 23, 2021 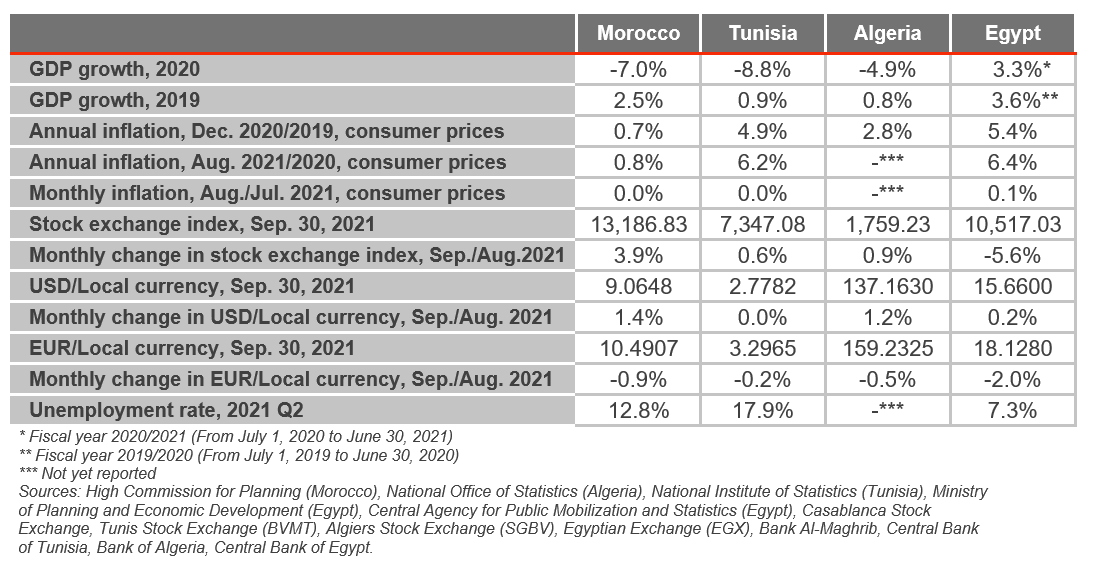